How do we individually cope, keep our sanity in a spiraling crisis, and help others? 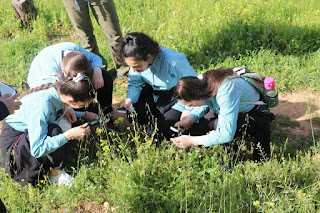 Girls exploring nature at the Palestine Institute for Biodiversity and Sustainability

It is almost a year since the start of this global pandemic with over 50 million who were infected and over one million died from. Everyone of us can count personal loss economic and human. Countries like India, Brazil, and the US were especially hit hard because of their corrupt leadership. But every country and region in the world suffered. Here in Palestine as an example, the viral infection rates are still on the rise especially in Gaza. Many Gaza Palestinians lost hope. Many young people are committing suicide. It is not only a pandemic of a virus but the pandemic of systematic racism and colonialism that spread. While Zionists spread hate and divisiveness to advance its goals around the world (via Hollywood, Bloomberg and Fox News etc), even they are starting to rethink what world are they making and will it be livable even for the billionaires. The stock market watched by the rich and powerful like Trump and Netanyahu went up because of the supposed potential vaccine. But this vaccine is no magic bullet. Its distribution will be a nightmare since it must be shipped on dry ice and stay very cold (freezer facilities of that kind are not found in most areas). The virus is also mutating and there will be new viruses. As a biologist and medical geneticist I can tell you there are simply too many humans and lots of viruses around us evolving.  Everyone also knows that the current economic system (capitalism/consumerism) is not only unable to deal with the new realities (pandemics, climate change, catastrophic wars) BUT IS ACTUALLY THE CAUSE OF THESE. Hence the challenge for common people: how to survive and create a better world to ensure our neighbors, friends, and children also live decent lives?

Most people of course at the most basic instinct want to survive as individuals and try to adapt as best as they could in times of crisis. I have seen people previously with decent jobs reduced to begging on the streets to survive. Debts are rising (individual, corporate, government) around the world. Few are doing well either by exploiting other people (I call it parasitic) or by having learned self sustenance (like intentional communities, farming to produce our own food etc). There are lessons to learn from indiginous/native people. Even in places that have forgotten their ancient ways, these can be revived. For example our Canaanitic ancestors and even my own ancestors as recent as 3 generations back were able to sustain themselves fully from the land (their immediate surrounding). This even when the green season is but 3-4 months of the year in Palestine.  I know it is doable. We developed a community garden and with few simple (permaculture techniques) we produce >70-80% of our (including volunteer) food. Very little waste is produced. This brings us satisfaction and a sense of control (keys to what is called happiness). Yet this is not sufficient because all around us people are unable to have decent jobs, feed their families, support themselves or feel a sense of empowerment. Personal satisfaction of even creating a team success (as at palestinenature.org) still seems deficient when our ecosystem is falling apart. A small batch of healthy forest cannot really survive long term when the rest of the forest is being destroyed. In this case it is even the rest of the global ecosystem.

As I started to write this on a sleepless night I was not sure where to go with it. But then I thought the best  is merely to ask readers for their thoughts. There is so much negativity in this world (justifiable by the state of our world). There are few positive foci doing good things (and we should be proud of those). We do want to promote the latter while realistically dealing with the former. Psychology plays a great factor in that as anyone realizes: you cannot help yourself, or others if you are depressed. The motto we came up with for our Palestine Institute for Biodiversity and Sustainability is "Respect: for ourselves, for others, for our environment". This is not easy. Many (including me who are still unsure of direction) would be curious to hear how different people help each other to develop these three levels of respect. We all are learning.  We all need emotional and intellectual feedback/support especially in these difficult (actually existential to our species) times. Homo sapiens is a social species. The (western) capitalist world system while packing us into urban areas (increasing urbanization) has ironically also isolated us in separate compartments/ apartments (physically and mentally). COVID-19 exacerbated this isolation. How do we cope with that? How do we support each other? How do we connect and communicate even more (online)? What is the new economic and social system that we should be building to replace the decaying/failing system we inherited? Please put your thoughts in the comments section of this blog or email me and I will post them.
Posted by Qumsiyeh at 11/12/2020