Knowing how small we are helps you/us achieve big things 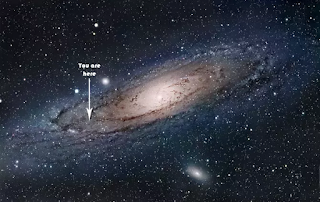 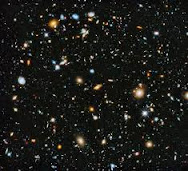 Each of us individual human beings is a very small part of a vast universe. Knowing who we are helps us achieve big things. Earth was formed as a spinoff planet some 4.5 billion years ago (bya) . It is part of a universe with no boundaries. An infinity that has trillions of galaxies like our own galaxy (the Milky Way). Our galaxy is actually "small" Compared to other galaxies. Yet our galaxy contains billions of stars like our small star (the sun). Life evolved on our small planet (there are billions like it in the universe) some 3.5 bya followed by evolution of photosynthesis 3 bya. Large animals proliferated in the Cambrian explosion 0.5 bya when levels of oxygen reached about 10% (now 21 %).  Aerobic metabolism is more efficient than anaerobic but oxygen has reactive oxygen species: oxygen, peroxide, hydrogen peroxide, hydroxyl radical etc. Proteins absorb 70% of reactive oxygen species. Humans evolved in Africa only a few million years ago and so still share >99% sequences/genes with our nearest relatives chimpanzees and gorillas. For most of our species’ (homo sapiens) existence on earth there were other species of hominids (human-like primates) with us like Homo habilis etc. We live in rather small populations with very difficult existence as hunter-gatherers using primitive tools (chimps also use tools). We then had the copper and iron ages which helped build populations. But it was the agricultural revolutions some 12000 years ago that ushered in an expansion of population (as food resources became more reliable) and this led to the so-called civilization. This agricultural revolution is documented first right here in the fertile Crescent and hence we have the Cradle of civilization. Jericho for example  is the oldest continuously inhabited town on earth.  Yet, humans remained susceptible to diseases and ravages of weather and much more. It was the industrial-scientific revolutions that finally allowed populations to grow in a logarithmic scale in the past 200+ years going from less than one billion in 1800 to nearly 8 billion today. We know the impact of this on our planet and everyone is now familiar with climate change and other human induced global changes.  Some 2/3rd of the world wildlife has already been lost thanks to human activities. Humans and their domestic animals now account for more than half of the vertebrate biomass on earth. The situation is recognized as unsustainable for our living planet. We need earth to survive but earth does not need us. Keeping this bigger picture in sight, us small human beings can and do make a difference especially when we work together.

Indeed humanity evolves both in positive and negative ways aided by the proactive action of its components. Let me take our example here: colonialism by European Jews in Palestine devastated an ancient indiginous way of life that goes back thousands of years. Over 500 villages and towns most of them going back sevral thousand years were evacuated/ethnically cleansed. An assault on a culture and society that is all too common in the modern colonial history (take for example the devastation of native societies in the Americas). But recognizing who we are and with humility, Palestinians defended themselves and refuse to simply vanish. Our people resist in the most amazing ways and retain their dignity in the face of colossal onslaught. Yes some do give up and even become collaborators (like some blacks in South Africa under apartheid) but the majority persist and resist (Sumud in its p[roactive meaning). We see that everyday not just among Palestinians but free thinking people around the world. Take our own small sphere here represented by the Palestine Institute for Biodiversity and Sustainability (PIBS) & the Palestine Museum of Natural History (PMNH) founded in 2014 as part of Bethlehem University (another beacon of hope founded in 1973). What the small group of volunteers (dozens) and staff (6-18+) were able to achive in this short period is nothing short of miraculous.  To get a glimpse of this, see our 2019 annual report here: https://www.palestinenature.org/about-us/final-annual-report.pdf

And since the lockdown, we are producing short virtual tours. We share with you the first two videos

On the botanical and ecogarden http://youtu.be/7cBil5ahC6o

On the cultural heritage exhibit  http://youtu.be/uNzameJYIQ8

And so we do big things with help but they are still small things in the universe.....