In the past 10 days, Israeli occupation soldiers murdered 7 Palestinians (including a 13 year old child), injured dozens, kidnapped nearly 400, demolished many houses, destroyed contents and broken doors on hundreds of homes invaded in the middle of the night, blocked travel to hundreds of thousands, and continues to imprison thousands many on hunger strike for being held without charge for months. One of the people they kidnapped is also Samer Aleisawi who is famous for having the longest hunger strike in history as a political prisoner. He was released only after human rights activists and human rights organizations exerted significant pressure on Israel He was now kidnapped using the excuse of three missing colonial settlers (which maybe a false flag operation to detract from the suffering of thousands of Palestinian political prisoners). In those 10 days, Apartheid Israel received nearly 100 million dollars from US taxpayers unaware of what their congress is doing with their money. And to add insult to injury the colonial apartheid state was given a vice president position in a UN agency that is supposed to fight colonialism. To say all of this is Orwellian would be the understatement of the year.


In those ten days other US supported regimes cracked down. Egyptian kangaroo courts passed death sentences and long prison terms on hundreds of their political opponents (including even journalists just doing their job). US supported "Saudi" regime puppets executed hundreds in Iraq.

But there are signs of resistance every where. Israeli parliament member Haneen Zoabi (a decent Palestinian leader in 1948 occupied areas) was brave to say the truth others did not dare say: resistance to occupation is legitimate, collaboration with occupiers against native people is treacherous. Demonstrations were held in Ramallah against the Palestinian authority (even throwing stones at a PA police station). This after  the PA police blocked several demonstrations some of them by family members of the Palestinian youth imprisoned by Israel.  There was resistance to the invading Israeli army in dozens of villages. Al-Aqsa martyrs brigade issues a statement from Balata refugee camp finally openly accusing Mahmoud Abbas of treason. But Abbas sent his wife to an Israeli hospital to give the Israelis a good media opportunities to vilify the Palestinians and beautify the occupiers.  But the most significant news of all: The Presbyterian church general assembly voted to divest from three American companies that aid the Israeli occupation: Motorola, Hewlett Packard, and Caterpillar. I wrote on my facebook page after the vote:

"Despite all the Zionist racist tactics that tried to intimidate, pressure, bully and trick commissioners, there was still enough of them principled enough to stand that and vote for what is right. Thank you to the Presbyterian church.. Presbyterians light the way for the rest of humanity.. kudos to all including our activists at Al-Rowwad who sent the message on the wall, the thousands of peace activists who wrote and acted and spoke out. Special mention to Jewish Voice for Peace. You all rock. We love you from Bethlehem"

Now our job is to resist to end this charade. We ,must approach other churches and we must engage in massive rebellion against the repression. Freedom is not freely given and it takes effort. Time to act is now.

The number of registered Palestinian refugees 5.4 million (plus many unregistered) http://www.imemc.org/article/68172

It is time to imagine a future without the "Palestinian authority"
http://972mag.com/its-time-to-imagine-a-future-without-the-palestinian-authority/92420/
Posted by Qumsiyeh at 6/23/2014 2 comments: 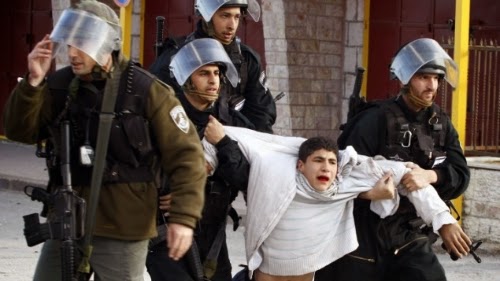 The most blatant and obvious manifestation showing western hypocrisy about violence and human rights remains in Palestine as millions remain refugees and massive land and resource theft continues supported by Western Governments who hypocritically still speak of human rights and international law (elsewhere of course).  I warned repeatedly over the past 20 years that unless human rights and international law are observed uniformly, the “Middle East” (Western Asia) and the whole world would be at risk of continuing down the path of mayhem and killings (“might makes right”). I repeatedly explained that we must choose the different path of justice and coexistence. This is not a new revelation as many have previously warned of the same choices as observed by Mahatma Gandhi, Martin Luther King (we either live together as equal or perish together as fools), Desmond Tutu, Edward Said and many others.

In September 2011 at the 10th anniversary of September 11, 2001, I wrote:
On this sad anniversary, there are a lot of “what if” scenarios being discussed and healthy reflections around the world.  For example, what if the US and Israel obeyed international law? What if we did not illegally invade and occupy Iraq and Afghanistan? What if Israel was forced to comply with UN resolutions on withdrawal from illegally occupied areas and forced to allow the ethnically-cleansed Palestinians to return to their homes and lands? In short what if we did not send the message that might makes right but rather that rights make things right? Would that not have been the most rational response to extremists whether they are wearing Turbans or wearing Kippas or wearing crosses?

The painful events happening throughout the area today (in Iraq, Syria, Afghanistan, Palestine etc.) are just a reminder of these missed opportunities. Some over the years knew the dangers we faced if we stayed down that path (e.g. see letter from George Salzman in 2008  http://site.www.umb.edu/faculty/salzman_g/s/2008-12-15.htm

Today, we see mayhem in Iraq and Syria as militias funded by US proxies fight to create an Islamist state in the same way the US funded the Taliban. Today we suffer collective punishment to millions of Palestinians (already living under apartheid laws) because three army-enlisted Israeli colonial settlers went missing. Israel punished the whole population including blaming the Palestinian authority even though the settlers are in the area of the West Bank that has no Palestinian authority presence. Gaza was sealed further, over 120 Palestinians were kidnapped in the past 24 hours, and we Palestinians in the West Bank are prevented from freedom of movement. Those under 50 are denied the right to even leave the country. If these brain-washed settlers living on stolen Palestinian land were taken by Palestinian resistance, this could be in  response to the starving Palestinians in Israeli jails.  5000 kidnapped Palestinians are held in Israeli jails including hundreds of children. Many of those are held for months without trial (called “administrative detention” but is a war crime per international law), Many are on a hunger strike for the past 50 days. Some are near death. The US administration  calls for the release of three Israelis who are illegally squatting on our land but has not called for the release of thousands of Palestinian civilians held in inhumane conditions in Israeli jails.

International law is very clear on the rights of people under occupation including the right to resist. Most of our resistance was by hundreds of forms of non-armed resistance. See my book “Popular Resistance in Palestine: A history of hope and empowerment”. Oslo was meant and succeeded in creating a local (subcontracted) “security force” to make this the most profitable occupation in history (at no cost to the occupying power).  But this would not work. It did not work before:  the Vichy regime in occupied France and Buthalesi regime in Apartheid South Africa. What will work is a known path untried since Zionism was founded and created mayhem throughout the Arab world.

Solutions are in our hands and they can only involve justice and coexistence. This certainly must not involve continuing the path of “might makes right”. It is time to think and act on rights as the path to our collective salvation. Tribalism, factionalism, sectarianism, Zionism must be ended and we must pursue humanism. There cannot be winners and losers only all losers or all winners. Let us all be winners by acting for peace and justice.

In my book “Sharing the Land of Canaan” published 10 years ago, I implored people to shed the notion that violence solves their problems. It only creates more violence. I ended the chapter on Violence and Terrorism by quoting Howard Zinn:

“To be hopeful in bad times is not just foolishly romantic.  It is based on the fact that human history is a history not only of cruelty, but also of compassion, sacrifice, courage, (and) kindness.  What we choose to emphasize in this complex history will determine our lives.  If we see only the worst, it destroys our capacity to do something.  If we remember those times and places - and there are so many - where people have behaved magnificently, this gives us the energy to act, and at least the possibility of sending this spinning top of a world in a different direction.  And if we do act, in however small a way, we don't have to wait for some grand Utopian future.  The future is an infinite succession of presents, and to live now as we think human beings should live, in defiance of all that is bad around us, is itself a marvelous victory.”
Posted by Qumsiyeh at 6/15/2014 5 comments: