This morning I took a group of seven volunteers to watch the sunrise in the desert area near Mar Saba. The stillness and beauty of the area caused me to then sit down and write this blog which reflects my thoughts on a dramatically changing world but essentially an unchanged human nature and interactions and the therapy of good deeds. 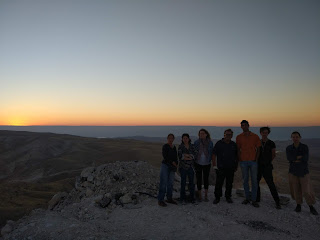 The nature of my work (95% of my 80 hour/week work is volunteer effort) since I returned from the US in 2008 to Palestine involves interactions with hundreds of people every week. There are children who come to the museum (palestinenature.org), university students, visiting international delegations, people on the street, farmers in marginalized villages, government officials, employees, international and local volunteers, and family and friends. The interactions increase every year because of the expansion of our network and activities.  I absorb silently those pieces of knowledge about people and their behaviors and it is fascinating always. However one could categorize them into negative and positive. Let me give negative examples first:

-Individuals who have an over-inflated ego who want to be in positions of more power for the sake of power
-Corrupt individuals (found in NGOs, government etc)
-Lazy people who sit around bemoaning their fate but doing little to change it
-Habitual liars
-Racists (e.g. many Zionists that keep sending me racist notes and articles)
-Individuals who come to you only when they need something and when you need them they quickly disappear
-Individuals who stab you in the back (because of jealousy or other)
-Fundamentalists who take their religion not as a mechanism to get spiritual, be kind etc but as a way to judge and punish the “other”

I could go on but I am sure my readers (especially those engaged in activism) know that list. But there is an even longer list of positives
-Individuals who give of themselves volunteering and helping (e.g. volunteers here at the museum).
-Individuals who take time to thank others for their good work
-Individuals who do their jobs with passion and gusto (when doing something they do it well)
-Educators who work with children and really make a difference in their lives
-Academics who care about their students and provide role models for critical thinking, questioning, civic engagement etc
-Researchers who add to our knowledge nin ways that serve sustainability of humans and natural ecosystems
-Those who engage in resistance sometimes at great cost to themselves and their families
-Poor and kind people who deeply know that sometimes a small gesture, a token gift (even a hand drawn card) makes a big difference
-Children who have an amazing mind to explore and learn.
-Students at the university who do not accept regurgitation of information but challenge and seek knowledge, critical thinking etc
-Women (and men) who have that beautiful nurturing spirit that creates ripple effect in society
-Activists who work hard to leave the world a better place.

Again I could go on. By listing the above, please do not understand that people are classified: behaviors are. Most (perhaps even all) people have a mix of activities some good and helpful to society and some destructive. Many people also change, sometimes for the better sometimes for the worse. But every day we do meet people who are overwhelming themselves with negative energy and some who exude 99.9% positive energy. Just the past 24 hours, I interacted in meaningful ways not just with a government official who sat around bossing people around and actually interfering with their work but with these positive people:

-A nurse who was going out of her way to help patients in overcrowded government facilities. She called older ladies mother and aunt!
-Omar who is a kind father of three trapped behind the wall (essentially a prisoner in his own home) who refused to give in to Israeli pressures to remove him and proudly showed me around a newly cultivated part of his farm (in Al-Walaja)
-A colleague who donated his book library to the museum
-Rotarian colleagues who had helped projects for women and children in Gaza and in Bethlehem
-Zohar joined me to go to deal with some bureaucracy and we got a chance to talk. She is a long term “Israeli” (I say human) volunteer who really cares about fellow human beings.
-Young international volunteers who come to work in the garden and wherever needed. Hard labor but idealistic people from seven countries who will not let us older people continue to destroy our plant.
-Gaza colleagues who survive against unimaginable odds.
-A friend who repeatedly refused privilege and money to maintain his principles and who always insists on paying for our dinners and desserts. He especially inspires young people.
-A colleague who came from abroad bringing us needed supplies that otherwise would be hard to pass by Israeli customs
-A Jewish man who takes time to try to explain to fellow Jews how Zionism is not the answer but is actually part of the problems facing Jews and the rest of humanity
-Staff at the museum who exhaust themselves, going beyond the call of duty to serve such as working with children here in the summer camp.
-Colleagues in the UK working hard to arrange a speaking tour for us
-A research building us an algal farm
-A volunteer building us a compost toilet
-My wife who while tired still goes around picking trash from streets and tending to others’ needs
-My mother who was so concerned that her garden tortoises were being stolen that she asked me to take the last remaining three (originally 11) to the museum where “they can have a better life) 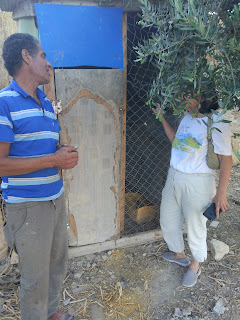 Omar and Jessie
And this is just 24-30 hours! The real stresses and difficulties of living under occupation, and occasionally getting stabbed in the back are more than compensated for by the therapy of sunrises, good company and kindness. We have always had ying and yang, angels and devils on our shoulders! What we chose to emphasize and work with is what shapes our future and our legacy: the good wolf and bad wolf struggling inside us. The one that gets stronger is the one we feed. So let us all try to feed the good wolf inside and we keep the hope alive. And may we always enjoy simple things like flowers and friends and sunrises.

This Week in Palestine magazine (best English language magazine covering Palestinian issues) just published  (July issue which is focusing on Green Palestine) two articles covering our work which are worth reading
Our study of Wadi Zarqa al-Ulwi protected area (a summary of an example project we did and do here)
http://thisweekinpalestine.com/wadi-zarqa-al-ulwi-protected-area/
A green oasis in invcreasingly urbanized Palestine: about our institute’s efforts in agriculture and natural landscapes
http://thisweekinpalestine.com/green-oasis-increasingly-urbanized-palestine/

How we miss our friend Edward Said and his writings and activism for Palestine. May we all try to leave such a legacy.