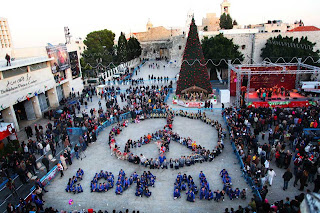 Bethlehem (Aramaic for House of Laham, the Canaanitic God of Sustenance) area is decked in colors and the best and most beautiful lights are the smiles on the faces of our children.  On Saturday evening, we attended a Christian service that was a joint service with the National Cathedral in Washington DC. The Palestinian children bell choir was uplifting.   Children led the lighting of the candles at churches, the singing, and the choirs and they outnumbered adults in most activities.  We were blessed by visited homes of poor children of different faiths. On Monday 3500 members of marching bands/scouts (most youth under 18) led parades near the apartheid wall separating Jerusalem from Bethlehem towards the Nativity square. Some of the marching youth were Muslims.  The marching band from Gaza (Christian and Muslim) was not allowed to participate by the Israeli occupation authorities.  Earlier in the day, children in the square formed a large peace symbol and the words "LOVE ALL" with their bodies in front of the massive Christmas tree in the square.  The United Nations Work and Relief Agency for Palestinian Refugees (UNRWA) had banners asking people to remember the suffering children in Gaza and Syria.

Later in the day, the Palestinian Center for Rapprochement and the YMCA/YWCA Joint Advocacy initiative organized a children's program.  Laughing and dancing lasted for nearly two hours and then gifts were passed to the kids by Santa Clause.  We all should remember that Jesus was born 2000 years ago in a humble manger.  My ancestors, the Shepherds of Beit Sahour recognized the message of hope and acted on it.  They and Jesus were Palestinians living under a foreign imperial occupation managed by local individuals who claimed religion and law. Herod killed the Children of Bethlehem to advance the agenda of hate.  Jesus advanced the agenda of love. His family became refugees from tyranny (like millions of Palestinians today). Jesus challenged military occupation with non-violent resistance and chastised Pharisees and Sadducees for hypocrisy.  He called for peace and helped the oppressed. This important child of Bethlehem is recognized by Christians, Muslims, and most of humanity (including atheists and agnostics) as a great teacher and a saviour. He taught all humanity that it is important to tell the truth and stand with the weak and oppressed of this world. He taught by example.  Palestinian Christians believe he became the first martyr for non-violent resistance to foreign occupation of Palestine.  He said "let the children come to me" and implored us to believe in goodness in the same way that children do and then to ACT on our belief.  Whether we are Christian or not, this is the message coming forth from Bethlehem this season and all the time.

If you are in the Bethlehem area let us get together and plan our actions for 2013 and beyond especially for the future of all children of our shared planet.

Tuesday/Today 4 PM Candle Light march for Palestine in Beit Sahour starting at the Shephetrds' Field followed by festival of Christmas with music etc.

Friday: At Izbet Tabib (near Qalqilia), Bilin, and other localities in Palestine, join marches  against the apartheid wall

Video from the simulcast with the National Cathedral
http://www.nationalcathedral.org/exec/cathedral/mediaPlayer?MediaID=MED-4VQJ8-QT000O&EventID=CAL-4MLPN-HC001K

"do not ask whom for the bells (of Bethlehem) toll, they toll for thee"

Christmas behind the wall

Action: Donate to a charity that deals with children; here are three I am donating to this month among many:  1) http://www.unicef.org/ 2) http://www.alrowwad-acts.ps (tax deductible donations in USA http://alrowwadusa.org, France http://www.amis-alrowwad.org/ ) 3) http://pcr.ps/read/donate-pcr

Below are articles and also media contrtacts dealing with Christmas in the land of Jesus.  Whether one is a Christian or not, the situation here calls for examination.

ABSTRACT to Environmental conference
Two recent reports published this year raise additional alarm on the status of the environment in Palestine and lack of adequate human preparations to meet the challenges ahead.  The UN report on Gaza projections by 2020 highlight population increasing to 2.13 million, increasing population density to 5835 person/km2, depletion of water aquifer, and increase in water demand by 60%.   51% of Gaza population are children and there will be a shortage of 440 schools by 2020.  The study on Gaza did not take into account the effect of global warming.For example a world bank study shows that in the Arab world cumulative effect of global warming/climate change will be the reduction in thousands of dollars of household income by 2030.  The projected change will vary by country in all categories including especially water needs and availability.  The effect on Palestine will be severe (1948 and 1967 areas). It is far more severe in 1967 areas even if Israel allows those areas to use the water resources due to geography and population density (including existing refugees).  For example in the WB and Gaza between 2000-2009, water demand  was 567 million cubic meters while supply was 170 mcm.  This differential is projected by the World Bank report to become 1587 mcm demand and 96 mcm supply. There are other impacts of climate change, population growth trends, and the misguided attempt to isolate us under the guise of a two state solution on quality of air, biodiversity, ecologic capacity, sustainability of agriculture, and more. The data combined point to a catastrophic future unless dramatic political restructuring is carried out combined with social reengineering at a grassroot level.  Our collective and individual responsibility is to act now and urgently

Have a happy, wonderful Christmas season.  May your new year bring you hope and empowerment to change
and …… stay human
Posted by Qumsiyeh at 12/20/2012 1 comment: 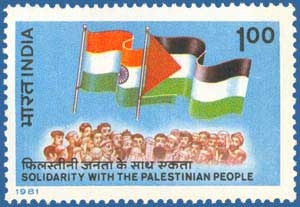 The developments in the last few days have been interesting to say the least.  Israeli papers are finally publishing stories showing that Israel assassination of the Hamas leader Jabari that began the latest attack was intentional and political.  Jabari was actually considering a draft ceasefre agreement reached between a Hamas representative and an Israeli with the knowledge of Israeli defense minister Ehud Barak and the Israeli hierarchy.  Perhaps that is why Barak announced quitting of political life knowing that this will come back to haunt him in the upcoming elections!  But Netanyahu and Lieberman are doggedly counting on the settler vote to win and had the plans ready ahead of time.  The vast majority of countries voted for accepting Palestine into the UN system as a non-member STATE (based on the 1967 borders but also with reference to UNGA resolutions 181 and 194).  Only Canada, the Czech Republic & a few tiny islands dependent on US aid voted NO with Israel & US.  Four days later, the United Nations voted to inspect Israel’s nuclear facilities (which had manufactured hundreds of nuclear weapons destabilizing the region).  The vote also calls on Israel to join the Nuclear Nonproliferation Treaty without further delay.  The vote again passed with vast majority: 174 countries votes for the inspection, six voted against, and six abstained.  The countries that voted against the resolution were Israel, the United States, Canada, Palau, Micronesia, and the Marshall Islands.  Shameful succumbing to Israel lobby by those very few counries (against their own people's interests).  But clearly Apartheid Israel is isolated and we must increase the pressure to isolate it further to achieve peace with justice.

The Israeli government arrogantly decided to continue violating International law: a) it rejected all relevant UN resolutions, b) it withheld Palestinian tax money (called stealing), c) it approved building even more colonial settlements on Palestinian lands (also called stealing), and c) it bribed and blackmailed politicians around the world (Israeli intelligence is good at getting dirt on politicians or even entrapping them) to avoid any concrete measures of punishment.  While all governments objected verbally (even the USA!), most failed to take any concrete measures against apartheid Israel for engaging in crimes against humanity.  In fact, some European countries and the US are applying pressure on Mahmoud Abbas (whose term expired two years ago) not to take actions in International fora to hold Israel accountable.

The Palestinian Authority is now on shaky ground and not only politically (because of the division) but economically and over 150,000 civil servants will likely not get paid this month.  All this emphasized to us Palestinians that liberation must come before governance.  We must depend on ourselves (with some help from civil societies around the world and few governments) and there are certain things that must be done NOW:  Fatah and Hamas and other Palestinian factions must implement their reconciliation agreements and the PLO must be reconsitituted on democratic ground to represent all 12 million of us and to deal with the grave challenges ahead.  History will not forgive leaders who can make and implement agreements with their colonizers (including Oslo and ceasefires) but cannot implement agreements with their fellow countrymen.  It is then possible engage in large scale popular resistance that gets most of the Palestinians to Participate and on solid footing and to take Israel to the International Court of Justice for breach of conventions like the Geneva Conventions, the Hague Conventions, and most importantly The International Convention for the Suppression and Punishment of the Crime of Apartheid  (see http://untreaty.un.org/cod/avl/ha/cspca/cspca.html ). Most Palestinians see that salvation will not come from outside and that unless we Palestinians are serious about challenging Israel, we will remain under perpetual occupation.  There is a role for the international society and millions are now activists in the campaigns of boycotts, divestment and sanctions as we did it with Apartheid South Africa.  Just last week, Stevie Wonder canceled his participation in concert that would have benefited the Israeli occupation forces (IOF).

Successes are mounting every week. I am back in Palestine tired but inspired by the energy especially of the youth in India whose conference was dramatically successful despite the odds.  Tears rolled up in our eyes as we witnessed Muslims, Hindu, Christians, Atheists, and others of India working hand in hand against racism in their own society (like Brahmanism/cast system discrimination) and racism in Palestine (Zionism). We all recalled the words of Mahatma Gandhi and other Indian leaders in opposition to Zionism and colonialism. Most were youth who are taking charge of their own future.  The alliance of Indian right-wing racism with Israeli and other racist/fascist movements now provides a joint target for popular movements around the world.  The internet provides a tool of organizing for the energetic youth who attended the conference in India (see http://ipsf.org.in/ ). On the other side of the world, thousands gathered and took important decision on the issue of Palestine at the World Social Forum in Brazil (see http://wsfpalestine.net/)

It still rings in my ears: India Zindabad!! Palestine Zindabad!!

Israel and Palestine, an animated introduction from Jewish Voice for Peace
http://www.youtube.com/watch?v=Y58njT2oXfE

Report from the PLO on the ongoing settlement activities
http://www.nad-plo.org/userfiles/file/fact%20sheet/Maale_Adumim_E1_Dec2012_en.pdf

Report from B'Tselem on "The E1 plan and its implications for human rights in the West Bank"
http://www.btselem.org/settlements/20121202_e1_human_rights_ramifications

When It Comes to Gaza, Don’t Let Obama Speak for Black Americans: ‘Like an olive tree planted by the water, we shall not be moved’ by Jesse Hagopian
http://www.commondreams.org/view/2012/11/24-1