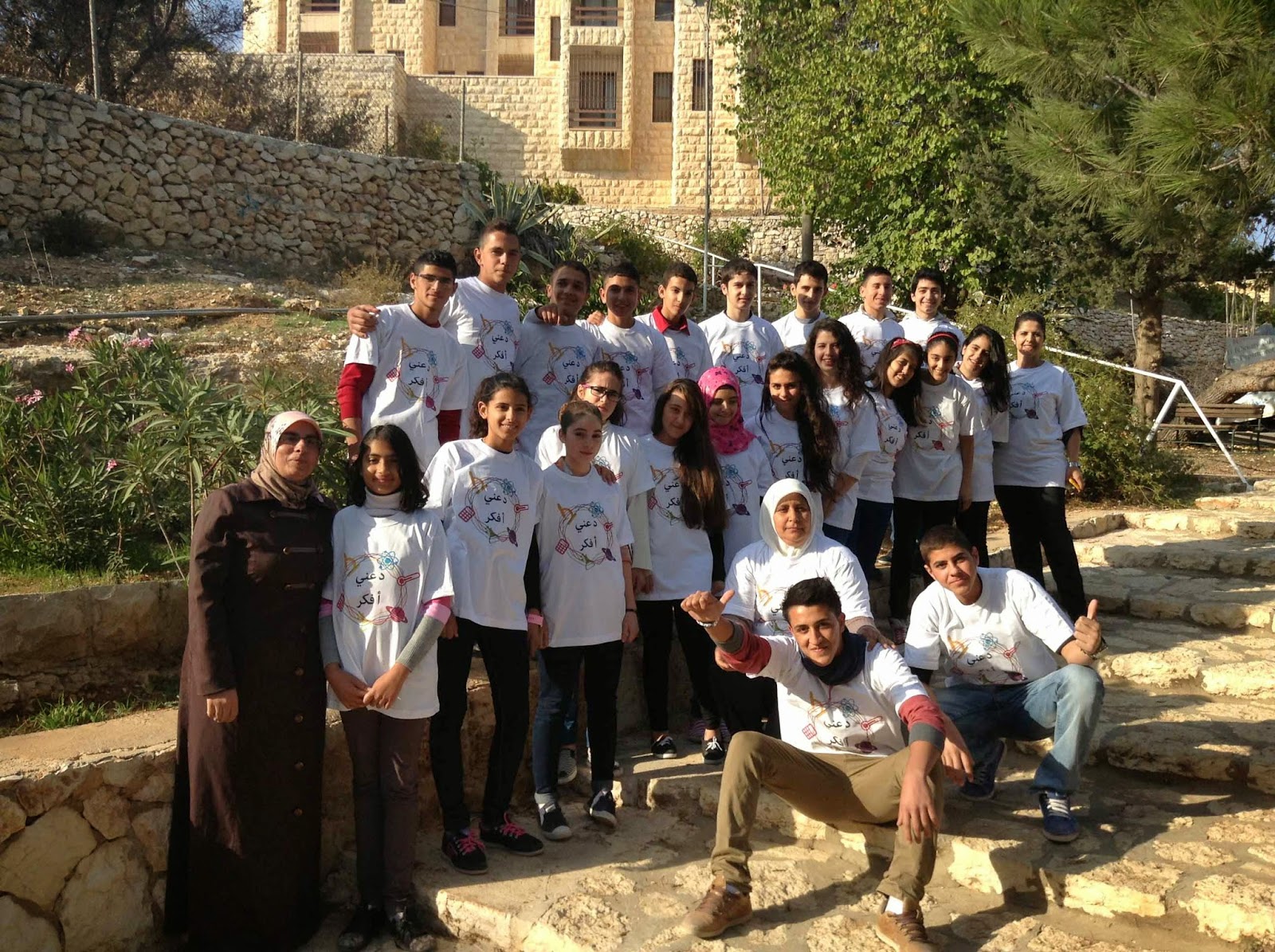 We are in the midst of the “Days of Science Festival” in Palestine (in 18 cities). In Bethlehem District, it is inspiring to watch hundreds of school children learn basics of questioning and basics of knowledge acquisition. Students just need opportunities to learn not to be lectured to. Unfortunately education is taking a back seat among Israelis and Palestinians to the ongoing daily distorted realities of the governments. For example 43% of the Palestinian authority budget goes to security (for Israel as subcontractors of occupation). Israel spent $8 billion just on the expansion and annexation apartheid wall to steal more Palestinian land. The Oslo and Paris accords ensured expansion of corruption to unprecedented levels (both in NGOs and government level).  Glittery buildings and fancy SUVs and hotels ensure the rich in Ramallah and Tel Aviv know little and care less about the marginalized in our society. Thus 25% of Israeli children and >50% of Palestinian children live below the poverty line. Otherwise good people (Palestinian and Israeli) now spend their days begging for aid from Europeans and Americans and writing progress reports and filling in text and pictures on imaginary “development activities”. The Palestinian authority figures and Israeli leaders play games and meet with “dignitaries” in 5-star hotels hoping they could delay the inevitable collapse of the corrupt system they created. Perhaps they think that one more year of the status quo means one more year to accumulate wealth of the hapless people. Meanwhile, the Zionist Knesset passes a racist “basic” law that consecrates Israel as the state of “the Jewish people” (Jewish national anthem, laws based on Jewish mythology etc). I do not know why people complain about the “Islamic State” when Israel has similar racist laws that set it up as a “Jewish state”.

Insightful letter from US President Thomas Jefferson to Mordecai Noah,  May 28, 1818: “I thank you for the Discourse on the consecration of the Synagogue in your city, with which you have been pleased to favor me. I have read it with pleasure and instruction, having learnt from it some valuable facts in Jewish history which I did not know before. Your sect by its sufferings has furnished a remarkable proof of the universal spirit of religious intolerance inherent in every sect, disclaimed by all while feeble, and practiced by all when in power. Our laws have applied the only antidote to this vice, protecting our religious, as they do our civil rights, by putting all on an equal footing. But more remains to be done, for although we are free by the law, we are not so in practice."

Colonization activities here in Palestine go unchecked: Jerusalem is being mutated to a Jewish city and its natives removed, and the common people suffer horridly (house demolitions, killing, jailing, ethnic cleansing etc). The rich get richer and the poor get poorer. International law and human rights are not relevant to the racist Zionist “might makes right.” Yet, we do not have the luxury of despair and we must redouble our efforts even in the spheres we can work. That is why we teach students at our universities. That is why over 30 volunteers are working hard every day on the science festival in the Palestine Museum of Natural History (at Bethlehem University). Changing behavior is critical to build the human resources needed to reshape the future. We believe we can make our own future and write our own history. The challenges we face are both external and internal and the internal challenges are far more pressing. We must end the mental colonization before we end the physical one.

I end with a message from a South African who participated in work with the World Council of Churches in Palestine: “Dr Mazin: your article today reads like a discourse from our apartheid South African history. It takes me back to my own childhood & growing up, the displacement of communities, creation of what they called homelands, alienation of family & friends. Tensions flaring, arrests, loved ones leaving the country of their birth, some to never be seen again. Violent killings or imprisonment of those who resisted. All this in the name of religion & the entitlement of one over another. It was legitimized by many countries around the world. That was why I couldn't just walk away in 2004 when I volunteered to heed the call of the Palestinian religious leaders via EAPPI & stayed for 2 years. I later realised why. It was something I knew, grew up with could relate to & also knew it would not, could not last forever. Unfortunately the world is so slow to react to this gross injustice, the same as with apartheid or the holocaust, or ebola, or South Sudan & so I can go on. Evil can only prevail when good man do nothing. My comrade never get tired with what you are doing, this too shall end. Aluta continua!!! In SA we also have another slogan : Amandla - Awethu!!! (Power to the people). Stay strong, I was born under Apartheid & lived & worked to see its end.”

I may add that like with South Africa, help of the international community must be directed at ending apartheid not at making conditions of imprisonment (colonization) a bit more tolerable to the native people. Hence I say encourage BDS (boycott, divestment, sanctions) and encourage real resistance to the apartheid state of Israel. Try to avoid those who claim they are resisting in order to get a few more donor dollars! Try to put your effort (and money) in a direction that produces measurable impact in that direction.

To see pictures of our activities in the science festival and more, look for our facebook page under Palestine Museum of Natural History. Also come visit us anytime.

The battle for Jerusalem
http://www.huffingtonpost.com/david-hearst/the-battle-for-jerusalem_b_6187818.html