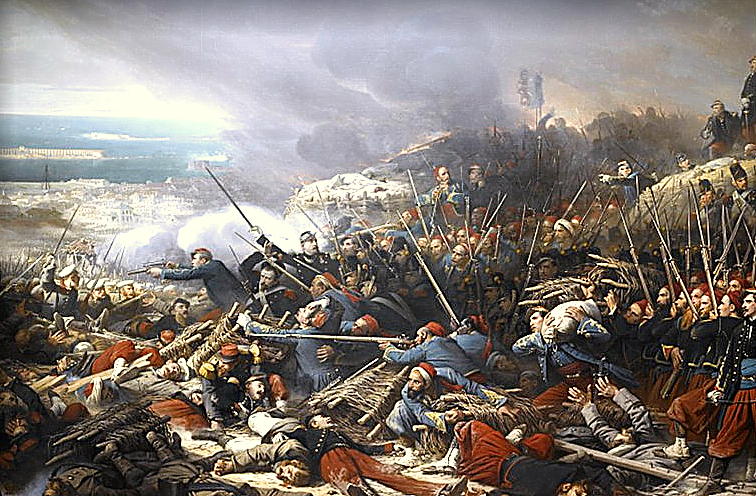 The Siege of Sevastopol 1855

It is sometimes instructive to learn a bit of history to reflect on current events because if we do not learn from history, we are bound to repeat the tragic history of useless wars.  This came to me as I read about the escalating situation in Ukraine, where the US and western countries invested heavily to dislodge the Ukraine (strategically located on the Black Sea) from Russian influence.  The coup that toppled the elected government in the capital and Russia’s strong influence in the mostly Russian Speaking Crimean peninsula of the Ukraine threatens to ignite another Crimean war (1854 prelude to many more European wars).

The Crimean war 1854-1856 was a devastating and useless conflict that was started with a with an incident here in Palestine (then under Ottoman Rule). The British were in the midst of an industrial economic boom (at least for the elites, the workers were essentially enslaved). To fuel this industrial boom, Britain (and to a lesser degree France) were aiming to expand their empires.  The weak Ottoman empire seemed a target. Russia’s influence on the religious Holy Places was high. This was understandable considering that most Palestinian Christians at the time and even still today are Orthodox (especially around the holy sites of Nazareth, Bethlehem and Jerusalem). Russian intellectuals have gone through a period of Westernization before the 1850s then grew disillusioned with the west and its hypocrisy.  Those who considered themselves Patriotic Russians thus became increasingly oriented towards Czar Nicholas and the Orthodox Church and increasingly opposed to the Western Encroachments on the borders of Russia.  When France instigated a provocation by Catholic supporters challenging Orthodox long standing traditions at the Church of Nativity in Bethlehem, a fury of high level diplomatic lobbying ensued with threats and counter threats that escalated to the Crimean war.  Alyce Mange wrote that ‘The Crimean War (1854-1856) was a war fought ostensibly for the preservation of the Ottoman Empire but actually for the curtailment of Russian encroachment’!

The war was costly to all sides concerned even though the Russian empire lost to the alliance of the three empires (Britain, France, Ottomans).  But the origin of the problem remained here in Palestine where competing Russian, British, and French interests remained until the first draft of the Sykes-Picot agreement (which divided their influences).  Russia withdrew and so it remained for Britain and France to divide the spoils of WWI in the “Near East/Middle East” (I prefer the term Western Asia to these colonial terms).  In parallel, there was the growth of the world Zionist movement that got from France and Britain the infamous Jules Cambon and Arthur Balfour Declarations (1917) partially as quid pro quo for the Zionists lobbying the US to enter the war.

Fast forward from 1854 to 2014 and we see again beating of war drums for hegemony with triggers in Palestine. The circumstances differ but this could also degenerate into yet another useless devastating war (except some people do profit from wars). The Zionist movement was unhappy about the lack of progress in their efforts  to destroy the Iran-Syria-Lebanon axis using others as canon fodder. A big part of their failure to get more conflicts (as they did with Iraq) is due to the fact that Russia (and China) refuse to go along and realized that the end-game is total Western hegemony in Western Asia (with Israel assuming even more power over Western foreign policies). The Russians and Chinese also took lessons from the disastrous US attacks on Iraq and Afghanistan and NATO attacks on Libya which had terrible consequences (including spreading radicalism and terrorism around the area). The calculated they must draw a line. The Zionist movement became involved as they do frequently because their key members are in the US State Department and also heavily influential in France and Britain.

They thought that we must break Russia’s will to resist encroachment in Western Asia. Ukraine seemed like an ideal “soft belly” for Russia. It seems possible that such reports as this one on Israelis involved in the protests in Kiev (http://www.presstv.ir/detail/2014/02/16/350986/israel-exofficer-leads-ukraine-unrest/) may have some basis. However, most Israeli meddling is not done via Israelis but via their now obedient people working for the US government. Also in this case, the  Russian government has been very friendly to the Jewish establishment. But Zionists preferv conflicts that help arm sales (laboratory tested on Palestinians). It is not a coincidence that problems are fueled in various parts of teh world especially in countries taht are not 100% in line (e.g. Ukraine and Venezuela). I do not know what will happen, but suggest that all wars are useless and counterproductive (to all ides); the history of the 1854 Crimean war should give us pause. And we shoudl not allow wars by proxy (as in Iraq) or direct (e.g. Israel last two attacks on nearby areas of Lebanon and occupied Gaza). Enough suffering.

What I suggest is that the talk about democracy by Western leaders like Kerry, Obama, Hollande and company is wearing thin. European public identifies Israel and the US as the two most dangerous countries on earth. Most people recognize hypocrisy. Most people know that democracy is not achieved by Coups against elected governments (whether in Egypt or Ukraine) and certainly not done on behalf of countries who support dictatorships everywhere that are friendly to their interests (see Saudi Arabia as a glaring example). For the good people of Ukraine (both in the East and the West), do not let your country be used for power politics again.  But also I suggest that they remember who their neighbors for the next few hundred years will be (hint it is not Israel or the US or England). But even those countries will not remain immune from destabilization and change if they do not learn to share this planet earth and respect other people.  Remember might does not make right and even great empires fell before. This brings me back to the point I always emphasize: READ HISTORY (objectively and not tribally).

(See Andrei P. Tsygankov Russia and the West from Alexander to Putin: Honor in International Relations)
Posted by Qumsiyeh at 3/02/2014 1 comment: