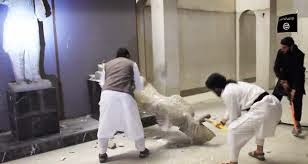 The kingdom of "Saudi Arabia" is going to behead a man for "apostancy" (renouncing his belief in Islam and the Quran) while welcoming Egyptian Al-Sisi whose security forces are torturing people to death in Egypt for being supportive of an Islamic political system more moderate than that of that Kingdom! Meanwhile the Egyptian kangaroo courts are declaring resistance movements outside of Egypt who have little to do with Egypt to be terrorist organizations. Sisi is also helping Israel enforce a siege on 1.6 million Palestinians (now that is terrorism). The Jewish State in Israel and the Levant (JSIL) in the name of ancient mythologies is using colonial settlers to kill natives, ethnically cleanse them, and torch churches and mosques with impunity. Meanwhile their progeny ISIL loots and destroys priceless human heritage going back thousands of years. It started in 2003 when US invaded Iraq and its soldiers sacked Baghdad. US soldiers were instructed to go and protect the ministries of oil and internal security but allowed pillaging 15,000 priceless archaeological artifacts from Baghdad. At that time I wrote warning that the plan was to break-up Iraq by encouraging sectarianism (until then unknown and people living harmoniously for hundreds of years).

Ashurian and Babylonian and Sumerian cultures were perhaps more civilized than our current "civilization" (based on monotheistic "religions" or on secular traditions). It is no wonder the remannts of those are being destroyed in Iraq in favor of the new idols (Netanyahu and Zionism). The congress of the strongest military power on earth (the USA) funds regimes that commit Nazi-like atrocities around the world. Israel gets the lion share of this (several billion annually). Netanyahu will try to justify genocide and ethnic cleansing of Palestinians and others. Republicans and some democrats will listen to Netanyahu call for yet another war for Israel. Zionists pushed for the catastrophic war on Iraq and Syria (Mesopotamia) and now are pushing for an even more catastrophic war on Iran (ancient Persia). Persian history and archaeology maybe destroyed like they are now doing for Mesopotamian history. Many of the bible myths are taken from ancient Mesopotamian and Persian stories recounted >1000 years before they were taken by the writers of the Bible/Torah (the stories of Adam and Eve, Noah and the flood, Abraham and Sara, Moses and an "exodus"). Perhaps the selective historiography while destroying records of earlier periods of human history is useful to those who want to use their religious narrative to rule. But it seems also useful for those secular people who want to advance hegemonic racist ideas. But it is not just history but the fragile environment that is targeted (see below on Red-Dead canal).

Perhaps the Obama administration is starting to see this and maybe that is why they declassified a document showing how the US helped Israel skirt International obligations and develop nuclear weapons (see below). Maybe that is a first and I hope that more documents would be released that show how previous administrations hurt US interests to help the Israeli lobbyists get their way (from hiding the Israeli deliberate attack on the USS liberty to selling US technologies to US enemies to the Iran-Israel-Contra affair etc).

Hypocrisies and atrocities go on daily in this "Middle East" thanks to all the weapons pouring in from countries that claim they want peace. The USA is the largest weapon exporter in the world and most of it comes here. Here is a novel idea if we want peace here: A total arms embargo on shipments of weapons to all countries in the Middle East (Israel, Egypt, Saudi Arabia, Syria, and others). Spending one percent of that money on human needs instead of on promoting killing would go a long way to reclaim our humanity. Here in ocupied Palestine, we are trying on a small scale to resist. From the Friday demonstrations in several village (this was tenth anniversary of the demonstration in Bilin) to trying to open Shuhada Street in Hebron (closed to punish Palestinians after a Jewish racist settler massacred dozens of Muslims at the Ibrahimi mosque) to daily sumud stories (we are planting hundreds of trees weekly) to education and research....Life goes on.

Note: Please write to object to the environmentally devastating project to link the Red Sea to the Dead Sea (supposedly to save the Dead Sea) whose first $800 million stage was launched last week. The Dead Sea was shrinking because of the Israeli diversion of the waters of teh Jordan valley starting in the 1950s, a catastrophic project. The onlty way to fix that is to return the flow of the Jordan river to its pre-Zionist plan. The envisioned project will destroy the coral reefs in the Gulf of Aqaba and will devastate the fragile ecosystem of Wadi Araba. http://electronicintifada.net/content/how-historic-israel-jordan-water-deal-leaves-palestinians-high-and-dry/13139

This opinion piece in the NY Times explains the importance of the work we do in the Palestine Museum of Natural History (Palesinenature.org). Libraries of Life: "... These collections are particularly critical in today’s era of rapid ecological and climate change, providing a unique and vitally important glimpse into ecological conditions of the past...." http://www.nytimes.com/2015/02/27/opinion/libraries-of-life.html?_r=0

Remarkable: How two Palestinian Americans plan to PIVOT the world
http://mondoweiss.net/2015/02/working-pivot
Posted by Qumsiyeh at 3/01/2015 4 comments: