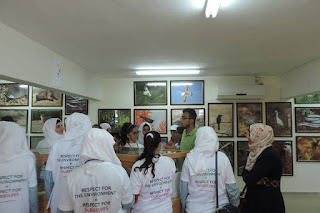 
The global environment is facing unprecedented challenges due to human activities ranging from climate change to large scale extinctions to destruction of forests. The threats are diagnosed at accelerating pace and alarm bells are ringing widely about a point of no return that we either crossed or about to cross. More research on diagnosing what ails ecosystem services than on effectiveness of various remedies. Behavioral changes among individuals via environmental awareness and education is considered a crucial component. Here we examine the role of well-structured free-choice institutions of museums and botanical gardens in societal change leading to valuing and preserving cultural and natural ecosystem services. We discuss a case study of a nascent Palestine Museum of Natural History and its botanical gardens now well established as part of an Institute of biodiversity and sustainability. The mission of PMNH is to research, educate about, and conserve our natural world, culture and heritage and use knowledge to promote responsible human interactions with our environment. Much was accomplished so far (see palestinenature.org). For example we explain how school students are using the museum facilities not only to enhance critical thinking and science skills but to develop practical knowledge and create programs that value and protect the rich heritage in nature (and associated cultural folklore of nature). We also engaged in a SWOT (strengths, weaknesses, opportunities, and threats) analysis of PMNH and discuss potential spread of this successful model throughout the region. We conclude that valuing ecosystem services in the MENA region (Arab World) would benefit significantly from expansion of this model in other cities band countries and propose a mechanism to do this via a network of institutions concerned with education for ecosystem services.
Posted by Qumsiyeh at 10/12/2016