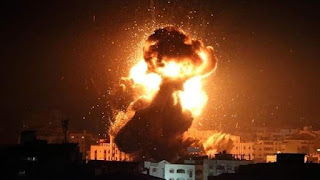 I was interviewed in many media outlets in the past 48 hours about the events here. My message beyond telling them what is really going on on the ground here is simple: This is not a “conflict” or a border dispute nor a tribal or religious issue. It is simple: the last tantrums of the unsettled settler colonial system. I expect things will get a bit worse (always darkest before the dawn). Bombing civilian neighborhoods, shooting unarmed protesters, and lying is a hallmark of all European colonial power encounter with natives. As this was true in South Africa under apartheid and in America after Spanish and British colonization, so it is true in Palestine under European Jewish colonization. Colonial officials like corrupt leader Benjamin Netanyahu (originally Mileikowsky from Poland) are proud of the so called “Iron Dome” defense system against Palestinian resistance rockets from Gaza (but the dome works only to very limited extent and is very costly). $40,000 per iron dome missile, over 1000 fired in the past week so it means it cost US taxpayers $40 million just in spent missiles in one week. US taxpayers are of course footing the bill against their wishes (thanks to the Zionist lobby in Washington) to defend Israeli apartheid ($4 billion annually in military aid– more than US foreign aid to Subsaharan Africa and Latin America combined). All so Israel can advance its illegal and racist policies of ethnic cleansing in Jerusalem and beyond. Thus the US continues to be complicit in violations of International law that amount to war crimes and crimes against humanity (e.g. 12 children killed by US supplied weapons just in one week in Gaza).But the new equation has shown that we are past that age when military might, walls, & armies can dictate the future. People will will dicate the future. The >13 million Palestinians (7.5 million of them refugees and displaced people) supported by hundreds of millions of decent human beings around the world will not succumb to brutal force of colonizers/occupiers/thieves. The smiles on the faces of young Palestinians being kidnapped by heavily armed thugs (aka Israeli security forces) alone gives us hope in a bright future. Palestine will be freed! Demonstrations were held not only in (occupied) Palestinian cities like Jaffa, Haifa, Lod, Bethlehem, and Jerusalem but in over 100 other cities from Washington DC to New York to London to Amman to Sanaa etc. All people see and feel the need to free Palestine – all of Palestine. This is also remarkable despite the manipulated mainstream media trying to hide and obfuscate (even when they report they claim “clashes” and hide the fact of colonial oppression vs oppressed people) and the governments colluding, funding, or normalizing with the apartheid regime. This is one of the most just causes in the world still left unresolved. The latest round started 12 April when Israeli occupiers started the latest round to attempt to restrict Muslims in Jerusalem in its relentless effort to Judaicize the city. For me personally, Jerusalem is my city. I was a high school teacher there and I live in a suburb of it called Bethlehem (5 km away from city center). That Israel denies me and millions others the right to even visit our city (illegally occupied according to International law) will not pass. We will be free. My recommendation to the Israeli public is decolonize their minds and shed the illusion of Jewish supremacy / exceptionalism, return the refugees and sit down with us to forge a future of peace with justice for all! Iron domes, concrete apartheid walls, delusions of destroying the third holiest mosque in Islam, and all the other “measures” taken only backfire. 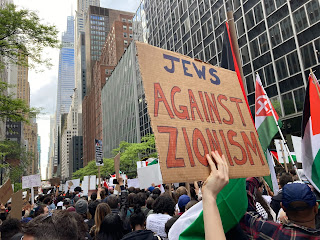 Footnote 3: On 9 May 2011, Haaretz published that Defense Ministry director general Maj. Gen. (res.) Udi Shani said that Israel plans to invest nearly $1 billion in the coming years for the development and production of Iron Dome batteries. "We are no longer approaching this in terms of initial operational capabilities but are defining the final target for absorbing the systems, in terms of schedule and funds. We are talking about [having] 10–15 Iron Dome batteries. We will invest nearly $1 billion on this. This is the goal, in addition to the $205 million that the U.S. government has authorized," Shani said