Seventy years ago at the height of the human induced tragedy called World War II, two bombs ("Little boy" and "Fat man") were dropped respectively on Hiroshima and Nagasaki. 250,000 human beings were incinerated to death and hundreds of thousands died slow deaths later with radiation poisoning. It was an unspeakable act of state terror still unparalleled in human history. It was politically motivated to sen d a signal to the Soviet Union. The lessons were not learned and today nine countries have arsenals of nuclear weapons (US, Russia, China, France, England, Pakistan, India, Israel, North Korea). A fraction of this arsenal is enough to wipe out human life on earth. Burning people alive continues ofcourse though on "smaller scale" and the West seems to ignore this. Take the burning of the Dawabsheh family in Duma (near Nablus in Palestine). Father and 18 month old died, mother and second sibling still in bad shape in the hospital. Perpetrators funded by the Israeli government are still unpunished. 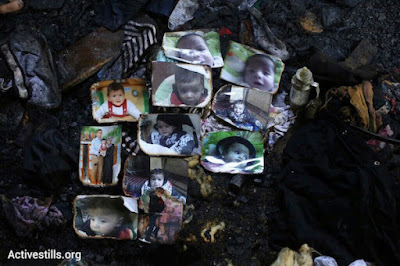 Yesterday morning the army of the colonial new "Jewish state" of Israel, 68 years of mayhem in the building, destroyed 15 ancient olive trees dating back 2-3000 years old in Beit Jala. The reason? Israel is going to close off the most fertile valley of Beit Jala western Bethlehem (Wadi Abu Ahmed, Cremisan area). Closing it off from its owners (55 Christian families of Beit Jala) is a step in confiscating it as happened before in thousands of locations. The world community and the Palestinian authority ignore the continuing massacre of land and people while occasionally making meaningess "statements". In practice though, the Western governments support Israel and have close working ties with it (thus are co-conspirators in the crime in the legal sense). But I do want to focus on the Palestinian authority (PA) and will argue that it is the biggest enabler of the occupation today. 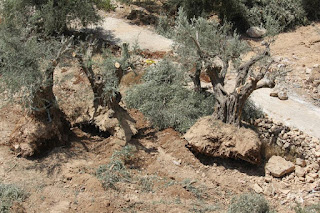 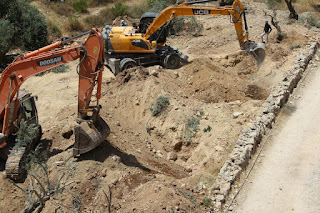 Let us start for the history creation of the PA. The idea of a self-governing authority in teh heavily populated centers of occupied Palestinian territories was an Israeli government idea adopted after a commission was created headed by General Yigal Alon in 1968 immediately after conquering these areas in 1967. After the 1973 war and the US interventions clearly acting on behave of Israel (Henry Kissinger,Arms shipments and other support that saved Israel), the "compromising" ("compromised"?) faction of the PLO decided to move to get the Western governments primarily the US to accept them. The ten point program in 1974 and the "declaration of Independence" in 1988 and the Oslo process in 1993 where all steps on the downhill course to implementing the Alon plan.  Oslo succeeded brilliantly in fully "domesticating" the PLO and finally rendering it a meaningless shell and replacing it with the PA, a subcontractor of the Israeli occupation. The nepotism and corruption of the PLO hierarchy under Yasser Arafat where the only real inheritance passed down to the PA. Money and jobs and privilege became the currency of those whose parents and uncles and friends suffered and even sacrificed their lives for. The latter believed in revolution and resistance, the former believed in endless talks and sacred security coordination with Israel and the US. Does anyone even wonder how is that in 1993, 150,000 settlers lived in these occupied territories and many of them were afraid for their lives and required armed escorts. Today in 2015, 650,000 colonial settlers are here and they live with impunity even burning Palestinian families alive. This is squarely the responsibility of the process described above and its fruit the PA which remains paralyzed to do anything and relies on the excuse of division between Fatah and Hamas. This was not some unforeseen outcome. The Palestinian advisers and other experts involved with the political leadership did warn of this. Some of these advisers left the "negotiations" in disgust and have nothing to do withe PA. Some to them realized they can do nothing but decided to get on the wagon of privilege and power and were thus co-opted by the Alon-plan's fruit, the PA. In the case of the wall that the International court of justice rule to be illegal in 2004, it is still being built on Palestinian land and the only way to stop it it is to end the mental occupation.

a) Implicitly or explicitly accepting that Apartheid Israel is powerful and here to stay (basically accepting the sub-humanization)
b) Implicitly or explicitly accepting that Apartheid Israel will alwqays be supported by western governments especially the US
c) Believing that the only options for having a semi-comfortable life is either to work for the PA or for NGOs (we will deal with NGOs in a separate article). This illusion of manageable life under occupation without a struggle for freedom is mental occupation.
d) The "why rock the boat" attitude combined with lack of belief in others (PA officials always tell me the Palestinian people are hopeless and tribalistic and weak etc).
e) the widespread mistrust of all who claim they resist (but the examples of martyrs and prisoners on hunger strike remain a challenge to this skepticism).

In my book on "Popular Resistance in Palestine: A history of hope and empowerment" I explain why such corrupt leadership eventually fades away and that people make their own history. Every day I see examples of heroism and self-sacrifice parallel with examples of cowardice and mental occupation. But those who put their personal interest ahead of their people interest are also fighting with each other over a shrinking "pie". History will disgrace them. Our job is to help people shed this mental occupation and arise from the ashes. The screams of women defending the Aqsa compound echo with the screams of the children burned alive and of the land owner in Beit Jala as he watched 2000 year live trees uprooted. These echos say "wake-up" and "fight". After all what choice besides living and fighting with dignity or living as slaves mentally occupied in fancy offices in Ramallah and elsewhere.  If the PA leaders want to reclaim a shred of decency, they would go in front of the bulldozers that even today demolished a home in Jerusalem and they would be arrested instead of begging the occupiers for crums. Remember the South Lebanon Army! Arise and reclaim your dignity!

Ali Dawabsheh, Cecil the Lion and the biopolitics of animal life
http://www.truth-out.org/opinion/item/32346-ali-dawabsheh-cecil-the-lion-and-the-biopolitics-of-animal-life 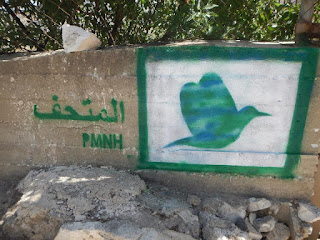 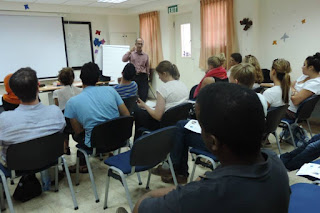