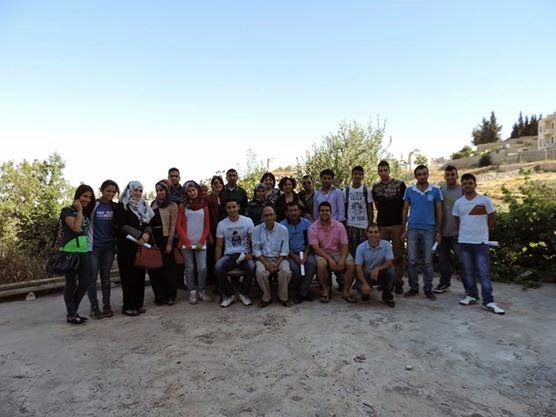 Some of the volunteers for the Palestine Museum of Natural History, Bethlehem, Occupied Palestine

I have not written much lately and this email maybe personal and hard. Our days start early and end very late. Our nights are also occasionally interrupted by calls from friends in Gaza or others who need some support. In the past 48 hours, over 100 Palestinian civilians were killed by Israeli occupation forces. Many of those are in Rafah. Sometimes I feel guilty that I am affected more by those I know than those who die that I did not know. For example, I cried after I hung-up the phone with Islam, a friend in Rafah who has four children and they can't sleep and their house shook and windows shattered as missiles rained on homes nearby. I cried because I know him and his handicapped son and his dilemma at whether to try to carry his son and run to the street or not. But then I cried some more thinking of the many innocents who got killed and injured and who I dd not personally know and did not cry for them earlier. Islam and his family will be traumatized for life. Hundreds of thousands will be even more traumatized. I can't even imagine a life of a girl who lost all her family members and carries emotional and physical scars for life.

Sometimes I think I carry scars too. Perhaps I cope because I am so lucky to have positive things to do daily to keep me from thinking too much. I am lucky because I can help others. I am lucky that I am surrounded by dozens of young volunteers that show us what life could be like in the future. Volunteers passing out fliers about boycotts, volunteers reclaiming agricultural lands, volunteers helping us build a natural history museum in Palestine, volunteers helping other volunteers cope with a difficult life, volunteers giving time and money to needy children, and volunteers doing media work (that should have been done by paid professionals). Aida refugee camp where some of those volunteers live is really unlivable because of daily dumping of toxic gas and toxic stink water by the Israeli occupation forces. Its health impact is dramatic and far worse than respiratory illnesses.

People ask me about politics and claim it is too complex. I say it is simple and predictable. For thousands of years we had a struggle between wealthy greedy people who employ others to shoot and injure poor people so that they wealthy people get richer. It was like that at the time of Jesus and it is like that today. Some (minority) who get offered a chance will join forces of repression and go with the flow of power. Others (also a minority) lead an active life that helps change things for the better for a lot of people. The majority in the middle remain apathetic. More people need to see the truth and act on it. It is not too difficult even for those who were on the side of repression to change. Yonatan Shapira former Israeli Air Force captain became a refusnik and BDS activist and once wrote: "Most of my family came from Poland and many of my relatives were killed in the death camps during the Holocaust. When I walk in what was left from the Warsaw Ghetto I can’t stop thinking about the people of Gaza who are not only locked in an open air prison but are also being bombarded by fighter jets, attack helicopters and drones, flown by people whom I used to serve with. I am also thinking about the delegations of young Israelis that are coming to see the history of our people but also are subjected to militaristic and nationalistic brainwashing on a daily basis. Maybe if they see what we wrote here today they will remember that oppression is oppression, occupation is occupation, and crimes against humanity are crimes against humanity, whether they have been committed here in Warsaw or in Gaza". I only add resistance is resistance' Warsaw ghetto residents also dug tunnels and were also called terrorists by their tormentors.

In my 2004 book “Sharing the land of Canaan” I wrote:
“Palestinians were subjected to cruel and unreasonable treatment over so many years that many begin to doubt that justice is possible and many certainly believe coexistence impossible. Similarly, since many Israelis have been feeling embattled and attacked that many also feel that coexistence is impossible. A defeatist attitude develops and envelops not only Palestinians and Israelis but also may of their supporters. But either the societies coexist as peaceful human beings or they will perish as rival primate societies.…..A sense of hopelessness and desperation leaves many looking for “crumbs” of both material and psychological “food”. This is especially stressful when combined with the deep commitment by many to historical myths of grandeur or glory. I am not going to spend much time on the history of the Jewish, Arabic and Islamic civilizations (volumes have been written on these). Suffice it to say that our psychological profile is one that contrasts our existing condition with the perceived greatness of our ancestors and our prophets. We thus assume ourselves as a privileged group but this immediately contrasts with what we observe to be the destitute present situation as described throughout this book. This is especially true for the Palestinian people who are dispossessed. We can address the bigger issues of why 1.3 billion Muslims or 300 million Arabs (Muslims and Christians) have so little to say in the direction of world economies and social and cultural developments so dominated now by the US as a sole remaining power. But perhaps this too can be resolved slowly once the knot of friction in Israel/Palestine is resolved. Imagine the example set if this one place in the world, previously an example of violence, endemic hatred and tribalism, can transcend all this to build a truly shining example of coexistence and non-violence. Imagine the billions of dollars spent on armaments going to desalinate seawater, to build high tech industries, and truly harness the great minds of the inhabitants (Jews, Christians, and Muslims) for positive developments.…....Perhaps we need to teach children to value themselves, value teamwork, respect others and defend the rights of minorities. This is not as simple as it seems. Adults perhaps need to learn to accept, in a very positive fashion, views that are foreign to them. In other words, someone who speaks his views regarding issues should be listened to and respected regardless of how sacred the holy “cows” may be.”

I end with a quote from Howard Zinn (You Can't Be Neutral on a Moving Train: A personal history of our times, p. 208): "To be hopeful in bad times is not just foolishly romantic. It is based on the fact that human history is a history not only of cruelty, but also of compassion, sacrifice, courage, kindness. What we choose to emphasize in this complex history will determine our lives. If we see only the worst, it destroys our capacity to do something. If we remember those times and places - and there are so many - where people have behaved magnificently, this gives us the energy to act, and at least the possibility of sending this spinning top of a world in a different direction. And if we do act, in however small a way, we don't have to wait for some grand utopian future. The future is an infinite succession of presents, and to live now as we think human beings should live, in defiance of all that is bad around us, is itself a marvelous victory."

Mazin Qumsiyeh
A bedouin in cyberspace, a villager at home
Professor, Bethlehem University
Director, Palestine Museum of Natural History
Posted by Qumsiyeh at 8/21/2014