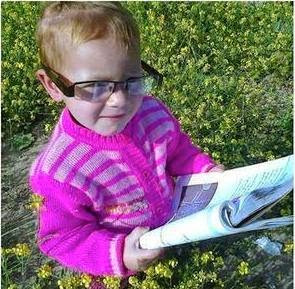 Salma Al-Radiya, 2 years old, was killed by shrapnel from an Israeli tank shell in Beit Lihaya, north of Gaza Strip on July 23, 2014.

The holiday at the end of Ramada brings mixed feelings and we could sense this here in Bethlehem on the faces of our Muslim neighbors, friends and colleagues. They tell us of their sadness at the massacres of whole families but they also tell proudly of resistance, persistence, resilience, self help and help to other. It is still a month of blessings. I was at the bank of Palestine on Saturday and saw lines of people sending money to colleagues and friends in Gaza. We had cloth and food drives. Convoys bringing medical aid are finally being allowed to enter even as 150 bodies were pulled from under the rubble in one neighborhood alone. Israeli soldiers speak to Haaretz of large scale destruction of civilian neighborhoods in Gaza and surprise and fear at the resistance fighters. Most people understand that Gaza is a big crowded prison that is being subjected to a most ruthless occupation that destroyed its economy and means of livelihood. Yet, some Zionists want to convince people that somehow resistance should not come from within this population! But there are no winners in the latest conflict started by Israel even though both resistance forces and Israel claim victory. Israel can claim victory by destroying so many neighborhoods, killing nearly a thousand civilians (very few resistance fighters). This they hope will teach a lesson not to resist. That is a foolish dream for all this does is stoke hatred and call for revenge from the killers and not decrease support among the population for resistance. Israeli intelligence agents know this (see for example below interview with ex-head of the Shin Bet). Israeli leaders know that with every strike on "Arabs" as they like to call us, resistance actually grows in strength and supporters. Hamas and other resistance forces gain in stature and Netanyahu appeared tough and gained some voters from teh racist right quarters in Israeli politics. Yet, Palestinians lives are lost that are irreplaceable and faith in human dignity tarnished as western leaders were forced to defend a an ongoing genocide so that they can please their Zionist lobbyists.The price paid by all humanity is far too high.

Let me start by actual pictures and names of those Israel murdered. They are not just numbers (1070 murdered so far including over 200 children). PLEASE take time to get to know some of them http://humanizepalestine.com/
(there were also at least 45 Israeli soldiers killed by resistance fighters and in some cases directly by Israeli forces; see below)

Now what is the real reason for the Gaza carnage? Benjamin Netanyahu blamed Hamas for taking three young Israeli settlers (colonial squatters in occupied areas). It turns out even Israeli police knew that Hamas leaders were not involved (even though teh suspects were never apprehended let alone charged). Hamas itself said it was not involved. see http://mondoweiss.net/2014/07/killed-turning-onslaught.html

But maybe this is the real reason: Armed robbery in Gaza: Israel, US, UK carve up the spoils of Palestine's stolen gas http://www.theecologist.org/News/news_analysis/2489992/armed_robbery_in_gaza_israel_us_uk_carve_up_the_spoils_of_palestines_stolen_gas.html

Governments lie, people die. Netanyahu is a consummate liar interested in one thing only: his political and economic career. Most Israelis know that he told them lies about this latest attack on Gaza, most know he lied to them about settlements and why he opposed Oslo accords. Most know their government lied to them about the success of the so called Iron Dome" (a scam to make millions with success rate below 30%). After all they could see for themselves falling home made rockets on their cities regularly. They also know much more. They know that Israeli forces sometimes do the unthinkable: e.g. Israel Murders IDF Soldier to Prevent His Capture http://www.richardsilverstein.com/2014/07/26/israel-murders-idf-soldier-to-prevent-his-kidnapping/

Yuval Diskin was the director of Israel's internal security service Shin Bet between 2005 and 2011 and he recently 24 July 2014 had an Interview with Der Spiegel/Reuters. He was asked " Is Israel not essentially driving Palestinians into the arms of Hamas? He answered "It looks that way, yes. The people in the Gaza Strip have nothing to lose right now, just like Hamas. And this is the problem. As long as Mohammed Morsi of the Muslim Brotherhood was in power in Egypt, things were going great for Hamas. But then the Egyptian army took over and within just a few days, the new regime destroyed the tunnel economy between Gaza and the Sinai Peninsula, which was crucial for Hamas. Since then, Hamas has been under immense pressure; it can't even pay the salaries of its public officials."

Divkin also Stated that "The army is now trying to destroy the tunnels between Israel and the Gaza Strip with a kind of mini-invasion, also so that the government can show that it is doing something. ...It is in equal parts action for the sake of action and aggressive posturing." But then he even reveals something that all Israeli leaders know but choose to ignore: "They [Palestinians] will never accept the status quo of the Israeli occupation. When people lose hope for an improvement of their situation, they radicalize. That is the nature of human beings. The Gaza Strip is the best example of that. All the conditions are there for an explosion. So many times in my life I was at these junctions that I can feel it almost in my fingertips."

He goes on to predict accurately increased shifts to extremism in Israeli society and admitted that Israel deals with Palestinian terror different than it does with Jewish terror. Full interview here: http://www.spiegel.de/international/world/interview-with-former-israeli-security-chief-yuval-diskin-a-982094.html

His observations while from a Zionist colonial perspectve concords in predicting a pressure cooker about to explode with other observors for example see this from someone who lived in Jenin for a while: The Paper Thin Underpinnings to Peace: Occupation and Intifada in 2014
Those of us who cut through the lies act. There were demonstration in over 100 cities including Tokyo, Paris, London, Chicago, New York, Washington, Cairo, Tunis, Rabat etc). Some had tens of thousands and some over 100,000 participants. Here are just some inspiring photos: http://mondoweiss.net/2014/07/worldwide-protest-israeli.html

There was even a demonstration of a few thousand in Tel Aviv objecting to the slaughter in Gaza. Some Israeli soldiers and reserves refused orders to mobilize to Gaza. All these demonstrations had mixed groups of people (all ethnicities and all religions). The few demonstrations for Israel and in support of killing Palestinians were tiny and included only Jewish Zionists (the largest was as expected in New York with a few hundred particularly angry and racist ones). We must concentrate on doing more positive actions and publicizing them. "Lighting a candle instead of cursing the darkness" as the old Chinese saying goes. I leave you with poignant note that a Church in Gaza is now home to dozens of displaced Muslim families. The pastor said that Islamic prayers in his church are welcome as Israel destroys mosques. That is the Palestine I love. That is the Palestine that will win. Decent Jewish citizens in the US were arrested as they demonstrated inside the NY offices of "Friends of the IDF" (a group supporting child killers tax deductible). That is the humanity that I love.

Let me end again with the pictures of Gaza Palestinians. Meet them and remember them http://humanizepalestine.com/ 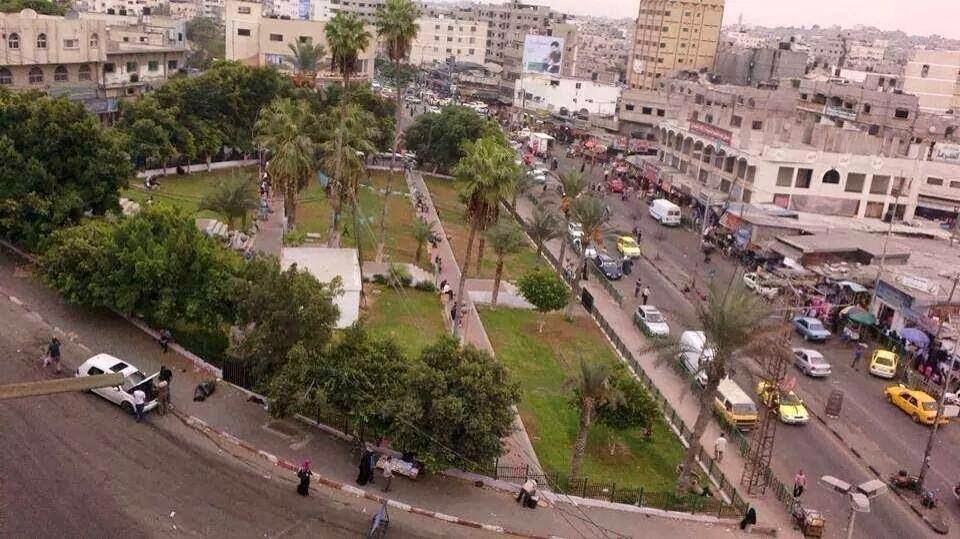 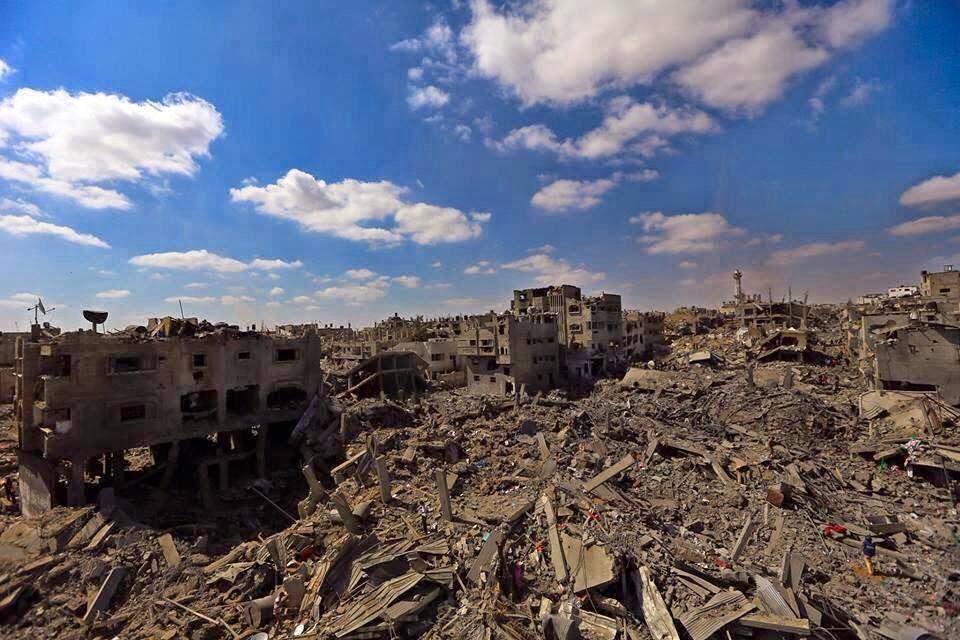 One neighborhood: Before and After the most moral army shelled it with US taxpayor fundig