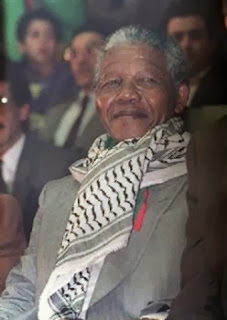 In this week’s compilation from occupied Palestine:  Today, a 14-year old child shot by Israeli sniper in the back in Jalazoun Refugee Camp. A Bethlehem young man was shot by the Israeli apartheid soldiers using live ammunition yesterday. Another lost his life after being in a coma for 7 months from an Israeli bullet. The Apartheid state of Israel exonerated itself from the murder of Mustafa Tamimi of Nebi Saleh so today we joined with the Nebi Saleh community to protest and also to commemorate Nelson Mandela (we carried his pictures). Our friend Ashraf from Bili’n was Mandela. We faced a barrage of rubber-coated steel bullets, tear gas, and stun grenades.  Mustafa’s younger brother Udai Tamimi was shot in the face and in now in a Ramallah hospital with broken jaw. Watch what Nelson Mandela had to say in 1990 about the PLO, Yasser Arafat, and attack on him from Henry Siegman (the immoral Executive director of the “American Jewish Congress”). Christian communities throughout Palestine will hold special services tomorrow,Sunday December 8 in honor of Mandela.

In Ramallah and Haifa there were conferences on nuclear weapon-free Middle East.  We recalled the very close military and nuclear weapons ties between Apartheid South Africa and Apartheid Israel.  And some data that is clear about the Apartheid Israel-Apartheid South Africa cooperation including on nuclear weapons. (BTW, the previous speaker of the Israeli Knesset Avraham Burg just confirmed Israel indeed has nuclear weapons).  Palestinian Knesset members just urged US Secretary of State Kerry to oppose Prawer Plan of ethnic cleansing of Palestinians from the Naqab (and a new demonstration with hundreds gathered in Jaffa also carrying pictures of Mandela).

Watch what Nelson Mandela had to say about the PLO, Yasser Arafat, and attack on him from Henry Siegman (the immoral Executive director of the “American Jewish Congress”)
http://www.youtube.com/watch?v=mMT36t6BADc

“The Unspoken Alliance": Book Documents Arms, Nuclear and Diplomatic Ties Between Israel and Apartheid South Africa.  Israeli President Shimon Peres has denied reports he offered to sell nuclear weapons to apartheid South Africa when he was defense minister in the 1970s. On Sunday the Guardian newspaper of London published top-secret South African documents revealing that a secret meeting between then defense minister Shimon Peres, and his South African counterpart PW Botha, ended with an offer by Peres for the sale of warheads "in three sizes." The documents were first uncovered by senior editor at Foreign Affairs Sasha Polakow-Suransky, author of the new book "The Unspoken Alliance: Israels Secret Relationship with Apartheid South Africa."
http://www.youtube.com/watch?v=UeYgKl1o1eA (part 1)
http://www.youtube.com/watch?v=29wx_pJsqck (part 2)