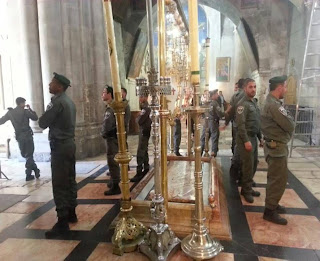 Today in Bethlehem, sunny and warmer than usual by 10 degrees (global warming?), is Easter Sunday.  It is a Sunday where Christians following the Western calendar celebrate the resurrection of Jesus.  This got me thinking about resurrection, salvation and what the real message of Jesus, the prince of peace was during his short years walking in the hills that now surround me.  “What would Jesus do” is a question that hovers in the background of this troubled land.  Well, actually the land does not have feelings to be troubled so let us say the troubled inhabitants of this land.  I am certainly troubled as most Palestinian Chritisans and Muslims are.  We are troubled because we cannot even get to our Churches and mosques in Jerusalem.  Palestinians who are already in Jerusalem are being pushed out as Israel continues its relentless program to make the city “Jewish” (whatever that means).  On this Easter, Israeli Jewish soldiers even defiled the Church of Sepulchre where tradition holds that Jesus was crucified and also buried.

We are troubled because just yesterday we commemorated Land Day and our commemorations were marred by Israeli violence.  Even trying to cling to memory of our lands stolen from us is a crime in the Apartheid state of Israel.  A law in the Knesset tried to stop commemorations of the Nakba (the catastrophe of ethnic cleansing of 530 villages and towns between January 1948 and December 1949).  But this is just one of hundreds of racist, discriminatory laws that make Israel the quinticential apartheid state.

Meanwhile the government of Mr. Abbas approved the “Palestinian Authority” (PA) budget of $3.8 billion that Israeli papers said shows continued dependence on Israel and the US.  The PA in the meantime have sentenced morepeople to jail for expressing dissatisfaction with the status quo.  In one case even sentencing a person for 6 months in jail for clicking ‘like’ on a facebook post that critiqued the PA. There is indeed a grave danger that we will have (if we do not have already) a police state serving Israeli interests. Decent people in Fatah must take note of what is being done in their name lest we have a “village league” scenario.  But back to our main bain and what brought to us the disastrous Oslo and all other disasters: the Israeli occupation.  Bethlehem, the Obama visited for 20 minutes, is still besieged and stripped of ist lands. It is still isolated from its sister cities of Jerusalem and Nazareth.  We still have a “permit system” worse than the one practiced in Apartheid South Africa. We still have Palestinian children being jailed and tortured. We still have owerful occupation stripping us of natural rsources and impoverishing us.  I coud go on and on but then I think again what would Jesus do?  He was actually in a similar situation. The Roman occupation was actually milder than the current Israeli occupation (and colonization).

Jesus was a Palestinian martyr; he was born in Palestine and spoke the language of my ancestors Aramaic, the precursor of the Arabic language.  He believed in resistance like turning tables of profiteers at the temple, challenging the “leaders” etc.  And he worked to help the poor and disenfranchised.  “Comfort the afflicted and make the comfortable a little less comfortable” as Dorothy Day once said.  He did not spend any time congratulating the rich and powerful or visiting their palaces.  When he did encounter the rich and powerful (e.g. Pharisees) he called them hypocrites.   I use it also to describe powerful today.  For example they speak of democracy and human rights while daily violating those.  They speak of love of God but they murder, steal, lie, and cheat to get money and resources and land of others. So I think what Jesus would do if he was still physically walking in these hills here is that he would join us in protests at the apartheid wall and stand in front of bulldozers uprooting olive trees and destroying Palestinian homes.  He would also still be telling us to be hopeful that the Son of Man will be brought to life again and that Palestine will be free again.  We Palestinians do have some experience with resurrection J

Manipulating the World to Destruction
The "exodus" story did not free the Jews. Just the opposite, it has been used to keep Jews in perpetual bondage
to a false history and to promote an attitude of constant victimhood, while distracting them from
realizing they might also play a role in the injustices done to others.
http://www.alternativeinsight.com/Israeli_Manipulation.html

Israelis say to Obama: Thank you for supporting our apartheid state
http://youtu.be/nfIcql9DJPI