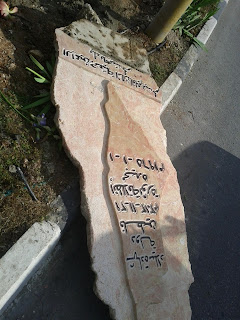 On the way back from the University of Bethlehem we noted a small bulldozer that has removed a stone monument with a map of historic Palestine (see above) and the olive tree at the entrance of the city (in Alkarkafa).  This was not Israeli authorities but the “Palestinian authority” (PA) from higher up but via the Mayor of Bethlehem.  Instead of the olive tree and the map, the idea is that Mr. Obama will see a new thing: a dove at the entrance of Bethlehem.   The people gathered angry and stopped the work. Some said that the PA was acting as a subcontractor for the Israeli authorities; PA security personnel still patrol the refugee camps like Aida to prevent young people from challenging the Israeli occupation and PA security officials still cooperate with the Israeli security officials.  They arrest Palestinians in the West Bank especially those affiliated with Islamic movements and they ensure that people who get government positions are loyal members of one faction (Fatah). Even strictly financial corruption of many PA officials and even after it is widely documented is not brought to justice. As I said while in South Africa, corruption is everywhere in the world and people need to mobilize against it.  When Abu Jihad (Palestinian hero and martyr of the resistance) was asked about corruption, he answered in the same way as Nelson Mandela answered: we can root it out AFTER liberation.  The experience in South Africa and in Palestine suggest that corruption must be tackled early and forcefully because it is a disease that spreads.

To President Obama: We ask you not to be delusional in thinking that those who meet with you represent the common people.  When you visit Yad Vashem you should also go down the hill and visit the ruins of Deir Yassin where Palestinians were massacred by the ideological descendants of Herzl whom you will honor.  And you will not be welcomed either in Ramallah or Bethlehem.  If Palestinian officials had any dignity they would have insisted you meet them in occupied Jerusalem, the capital of Palestine. And the gibberish you will hear does not represent the main demand of the Palestinian people: the right to return to our homes and lands. So even if Abu Mazen says he does not want to go back to Safad, no peace will be possible without Restorative Justice.

This week in Palestine magazine looks at humor in Palestine
http://www.thisweekinpalestine.com/

Is This Where the Third Intifada Will Start?
http://www.nytimes.com/2013/03/17/magazine/is-this-where-the-third-intifada-will-start.html

Action: Save Masafer Yatta: Save over 1000 people including 452 children from being forced from their homes and their land that they have lived on for centuries. Tell Israel to let these villagers live in peace.
http://www.avaaz.org/en/petition/Save_Masafer_Yatta_2/?ciwcrbb