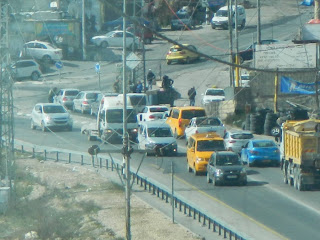 I was with two of my students and an International visitor heading to Birzeit for our first class in biodiversity this semester on Saturday when we got selected for search at an Israeli “flying checkpoint”.  There are hundreds of fixed checkpoints inside the illegally occupied West Bank, most are between one Palestinian area and another and not on the “Green line” but we also have to face the “flying checkpoints” which literally can be anywhere and anytime.  In this case a long line of cars were held at Hizma.  When it was our turn, a young Israeli younger than my son told me to stop.  I said can I pull to the side to let other cars pass.  He said no.  There were several of them young recruits dressed in police uniforms and in army uniforms.   In the occupied territories the two services are indistinguishable and operate as one fascist occupation force.  Another Israeli was nearby so I said why can’t I pull to the side.  He turned over to his commanding officer who nodded his agreement.  Then the officer asked me to pull onto the circle in the middle of the road.  They asked for all our ID cards and handed them to another person who went to check them via his computer.  Then they demanded each of us get out of the car in turns.  My students in the back first, then the international visitor, then me.  Some of the uniformed occupiers pointed their guns at us while others demanded we empty all our pockets and frisked us.

They searched the car and they flipped through the camera memory to see all our pictures. They were saying things in Hebrew and I was telling them repeatedly we do not speak Hebrew and that we can speak in English or Arabic to them.  I think they all understood English and at least two showed they understood Arabic after persistence from us.  I repeatedly asked in Arabic and in English why we were picked on.  One occupier said it is because he liked the shape of my car!  When I turned to a female soldier and asked her the same question and adding “are we living in a fascist state,” she merely shrugged her shoulders and said “he liked your car”.  They did not smile but I did, which seemed to irritate them.  Ryan was asked if he smokes anything and why is he here.  Then they asked him “do you like Palestinians,” to which he answered “I like all people!”  After delaying us for half an hour, they handed our ID cards to the international visitor and let us go.  For me, I was used to this.  One of my students (also a museum employee) is from an isolated village of Nahhalin which is frequently closed off has also been frisked and checked many times in the past.  His village was closed in the last three days and he sleeps in Bethlehem instead.  My other student (also a museum employee) and the international visitor had never experienced such harassment.  We joked later that this was a “good taste” of colonial occupation for them.

We discussed how these are really mild experiences compared to others.  For example, for the first five weeks of 2016, Israel demolished an average of 30 Palestinian structures weekly, displacing an average of 66 persons a week (this is three times the weekly average than that in 2015).  Palestinian young people as young as 12 continue to be murdered by Israeli occupation forces almost every other day.  Israeli soldiers carry knives in their backpacks to plant as "evidence" against many Palestinians they murder.  But there is growing Palestinian desperation.  Israeli occupation forces currently hold hundreds of Palestinian political prisoners without charge ("administrative detentions".)  At least one of those who has been held for nearly three months is on hunger strike (taking only water and salt.)  He will likely die in the next couple of days if Israel does not release him (Mohammad Al-Qeeq).  The Israeli Knesset continues to add racist laws to an already long list of racist laws (over 50) that discriminate against non-Jewish "nominal citizens". This is not counting hundreds of military orders that discriminate against us who are not considered "nominal citizens" in our own country occupied by individuals with a superiority-inferiority complex gathered from around he world under the banner of Zionism.

Gaza's situation is far worse than the West Bank and Gaza prisoners get no family visits and the Strip is besieged and starved of basic supplies.  Most of the tunnels that "smuggled" humanitarian supplies have been destroyed.  A slip of the tongue by Israeli Infrastructure Minister Yuval Steinitz revealed that Egypt’s new policy of flooding the tunnels between the Gaza Strip and the Sinai Peninsula with seawater had come at Israel’s request.  The promise of rebuilding after Israel's last genocidal attack on Gaza never materialized.  We shudder to think that it is again time for Israel to test new weapons on the Gaza "laboratory". Israel's largest "export" is weapons-related technology, and Israeli leaders have to "test" their weapons on the nearly two million captives in the open air prison called Gaza Strip.

Meanwhile Fatah and later Hamas have taken the bait/infection of "Oslo process" believing it is possible to have an authority under occupation.  Here in teh West Bank many good Fatah leaders admit to us privately that they do not support the president whose erm expired years ago and who firest anyone who criticizes him. Yet he takes unilateral decisions to join the despots in "Saudi Arabia" and his speeches are frequently dotted with statements like "we have our hands stretched for peace.. we stop any armed resistance..we arrest activists... we believe only in peaceful demonstrations...ask [beg] the US and International community to exercise its responsibilities .. etc".  Contrast this with what Ho Chi Minh once said: “Viet Nam has the right to enjoy freedom and independence and in fact has become a free and independent country. The entire Vietnamese people are determined to mobilize all their physical and mental strength, to sacrifice their lives and property in order to safeguard their freedom and independence.”  Or what Martin Luther King Jr said from Birmingham jail: "I have been gravely disappointed with the white moderate...who is more devoted to 'order' than to justice; who prefers a negative peace which is the absence of tension to a positive peace which is the presence of justice; who constantly says: 'I agree with you in the goal you seek, but I cannot agree with your methods of direct action'; who paternalistically believes he can set the timetable for another man's freedom; who lives by a mythical concept of time and who constantly advises the Negro to wait for a 'more convenient season.'" Or even what Yasser Arafat said during the siege in Beirut or when Israel was pounding his last two rooms in his Ramallah headquarters "we will have freedom or die as martyrs".

It is hard to cope with political leaders who do not seem to push strong enough but it is harder to deal state terrorism (which is far more devastating than individual terrorism). I (almost) retain sanity by staying busy (teaching plus other volunteer jobs including directing the Palestine Museum of Natural History, clinical laboratory work, writing, lecturing on Palestine, visitor guiding, research, and more.)  Birzeit University where I teach (more coach) a Biodiversity course is a beautiful campus with great students and faculty.  Before class, and having been delayed at the flying checkpoint, my two students had to rush to finish their work on “fruit flies/Drosophila”.  Spring is here and he gardens are blooming. The smell of freshly dug air mixes with the smell of almond blossoms. Good people and good food ameliorate life under occupation.  It helps to have a larger cause than one self.  Like MLK Jr and Steven Biko and Malcolm X, we are some times bewildered by the people around (including internationals and Palestinians) who show signs of "mental occupation" or are simply apathetic. But I would like to focus on those who have freed their minds and are helping others do the same.  There are literally millions of points of light out there.  We do not "win" over the darkness but it is those lights that make life meaningful. My own students (at Bethlehem Bible College, Birziet, and Bethlehem University) are also lights. For all those points of light we say thank you.

Here are a few lights expressing via writing "We are not just numbers" http://www.wearenotnumbers.org/

And here is a timeline of positive actions using boycotts, divestment, and sanctions (BDS) done in 2015 as examples of points of light http://bdsmovement.net/2015/bds-full-2015-round-up-13628

Having humility to recognize all these lights can help us amplify our own small light.

If you want to help in lighting our small candle locally, please see this
http://www.palestinenature.org/about-us/

ACTION: The UK and US government are introducing new rules that would prevent local councils from supporting BDS.
If you live in the UK, please take action to stop the government doing this.
http://waronwant.org/protect-local-democracy
In the US, please write your representative
http://org.salsalabs.com/o/641/p/dia/action3/common/public/?action_KEY=19106
Posted by Qumsiyeh at 2/14/2016