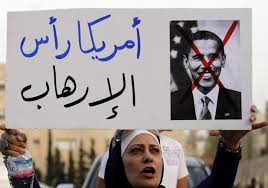 I am a Palestinian from the Bethlehem area but who also happens to hold a US passport.  The latter does not allow me to enter Jerusalem and the US government will not protect this or other rights I have (including family reunification). Meanwhile, any Jewish American can come and get automatic citizenship and live on stolen Palestinian land in our city. It is hard to describe the level of frustration that I had watching the theater of media frenzy (devoid of any real substance) about Obama’s visit.  Obama gave a new lifeline to war and conflict by avoiding human rights and international law.  It is the missing ingredient that for the past 65 years precluded peaceful resolution. It is the twisted logic that says the insecurity of the thief must be the only thing to be dealt with by ensuring the victims first recognize the legitimacy of the theft and the legitimacy of the need for the thief to first have full security and immunity from accountability for the theft before the victim is put in the room with the armed thief so that they can work out something (vague and without reference to International law). That formula has been shown to be a disaster and has kept Apartheid and colonization going.   Israel has no incentive to allow a Palestinian sovereign state let alone redress the injustice (e.g. refugees, theft of land and resources etc) as long as it continues to get unconditional check from our tax money and guaranteed veto of the US at the UN protecting it from International law.  This plus over $12 billion in profits from the occupation of the West Bank and Gaza (captive market, natural resources etc.) ensures the occupation continues.  But Israeli and American governments are thinking short term.  Long term, the changing reality (in the Arab world) and demographics in Palestine will ensure change. Obama alluded to this when he told Israelis that no wall will be tall enough and no iron dome will be strong enough and that peace is imperative.  The problem is he failed to follow his own logic and press Israel to change and instead repeated the same failed logic that "bilateral" negotiations between a strong occupier/colonizer and a weak leadership of colonized/occupied people is the way to go.

Below are some of the things that happened during Obama’s short visit.  You be the judge of their value or relevance to bringing peace.

Palestinian and American security coordinate to clean streets of any thing that might allude to Palestinain rights (refugee signs, maps of historic Palestine etc).  They change all manholes in targeted areas spending millions for excessive “security” for the unwanted visitor to Bethlehem and Ramallah. Palestinian security preemptively arrest dozens and suppress peaceful demonstrations succeeding in isolating Obama from seeing Palestinian anger.

Massive traffic jams, and on days of visits an essential siege and curfew on Ramallah area (Thursday) near Al-Muqata and Bethlehem (Friday).  The preparations create significant damage to economy and livelihood of tens of thousands of Palestinians.

Selected choreographed visits by Obama to Hertzl’s and Rabin’s tombs (the former who called for ethnic cleansing, the latter who executed it) but not to Yasser Arafat’s tomb.

Obama calls on Palestinian officials­­ to resume bilateral negotiations that led to nowhere in the past 20 years, to accept Israel as a “Jewish state”, and not to seek implementation of International law via International bodies like the UN or the International Court of Justice.  Perhaps not coincidentally, the Palestinian mission in Geneva has put out mild drafts that do not take advantage of the strong  findings of the UN Human Rights Council (see item link below).

Obama brokers a deal by pressuring Turkey to accept a tepid Israeli statement of regret for the deaths of Turkish citizens with some compensation for families and restoring Turkish-Israeli strategic relations (presumably including military cooperation). Turkish demands for lifting the siege on Gaza is dropped.

Obama, like his predecessors, identified Hizballah, Syria, and Iran as a dark axis of evil while Israel as a perfect model of democracy and beauty.

Obama in his speeches adopts the Zionist myths that Apartheid Israel is redemptive and that it is the guarantee against another holocaust (it is actually the reverse). Obama fails to mention that this “great and technologically advanced country” is actually built on top of Palestine and by destroying 530 villages and towns and by looting property and patrimony of millions of Palestinians.

Obama will send John Kerry to try and restart the “Palestinian-Israeli negotiations.”

Obama defines what we Palestinians want (supposedly a vague “viable state”) even though for most of us, we want return to our homes and lands and freedom from racism and apartheid.

Obama will give Jordan $200 million to help Syrian Refugees.

Obama reminds the Israelis that his administration developed unprecedented support to the apartheid state of Israel especially in the field of security.

Obama highlighted the Iron Dome system and praised it but now documented data show that they are less than 30% effective as opposed to the government insistence that they had 90% success).

Obama claimed the West Bank is in good shape because of Abbas and Fayyad and compared to Gaza which he claimed is miserable under rejectionist Hamas.

What Obama and his large entourage fail to mention during this supposed “historic visit”: human rights, international law, the tenth anniversary of the murder of US Citizen Rachel Corrie, Palestinian rights and security, justice, land confiscation, apartheid laws, illegality of settlements, US opposition to Palestine joining the UN, applicability of the Fourth Geneva Convention, how much taxpayer money is given to Israel, the siege on Gaza, the freedom of movement, the attack on US citizens’ rights by Israel….

Amira Hass writes on Humanitarian hush money: The generous aid given to the Palestinians through various channels is the reward offered by Western states in exchange for the tolerance they show toward Israeli apartheid. http://www.haaretz.com/opinion/humanitarian-hush-money.premium-1.501672

A brave Palestinian confronts Obama asking if he had come here to bring peace or to continue arming Israel for war instead of dealing with the substance Obama claims this “heckler” proves democracy http://www.youtube.com/watch?v=kiPH-olTfuA

Palestinians build another tent village on our lands while Netanyahu and Obama speak about Iran and continue colonial settlement expansion on natve Palestinian lands. Video with message to Obama
https://www.youtube.com/watch?v=Dt7Qc7mRZ3I

Netanyahu: Leaked video shows how he lied to the US and the world
http://www.youtube.com/watch?feature=player_embedded&v=Cl60X_jOsR0#!
http://imeu.net/news/article0019451.shtml

A short documentary on the relevant issues of the peace process (From the PLO Negotiations Affairs Department) http://www.youtube.com/watch?v=R94Ss8hRqhk

and here is from Jewish Voices for Peace a short course on the Israeli-Palestinian conflict
http://www.youtube.com/watch?v=zCMFzBGV5qE