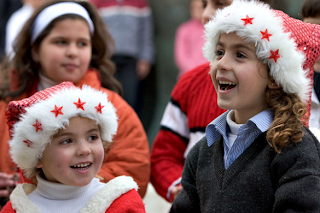 Photo" Children in Bethlehem wish you a happy new year 2013

Obama was reelected president of the USA, a country still under Israeli occupation. So he fails to make Israel accountable for violating International Law and even American law. US law prohibits funding a country that persistently violates human rights. Israel goes on doing just that on a daily basis. But despite Zionist efforts, most countries recognized Palestine and Israel lost its attack on Gaza and lost more of its credibility.  Bethlehem is celebrating its first Christmas as a world heritage site (per UNESCO) also despite efforts by the increasing isolated US and Israel to stand against the tide of history and people power.

The Apartheid State of Israel (ASI) continued ethnic cleansing that it engaged in from its founding days when it ethnically cleansed 530 Palestinian villages in towns). In 2012 ASI removed more natives from the Jordan valley and from the Negev and from the hills of the West Bank. ASI continued to squeeze us natives into smaller and smaller ghettos/Bantustans/concentration camps. ASI even started beginning November 1 to restrict the internationals who manage to come here to“Judea and Samaria” which prevents them from even entering Jerusalem.  But I as a Palestinian native like 99+% of Palestinians do not have “Israeli permission” to enter my own city of Jerusalem. However, I entered Jerusalem from Bethlehem in the New Year by bypassing the occupation soldiers showing again that these restrictions are not about security but about harassment. Thousands of Palestinians still do this as an act of civil disobedience to the illegal occupation policies.

I enter to see a city being disfigured and 5,000 years of its history slowly destroyed or disfigured. Israeli colonial settlers continue moving into Palestinian homes and lands with Israeli government support (and US government subsidy). Palestinian natives are meanwhile prevented from normal housing, normal education, and normal living. I enter and I have pain in my heart to witness injustice, war crimes, and crimes against humanity. But I also have pain to see many of our own people corrupted by money. Hundreds of thousands of dollars for example where just spent on “celebrations” of the birth of political factions that have long been overtaken by corrupt leaders who abandoned the original programs of these factions in favor of normalization with the occupation. Expensive shiny cars are all over major Palestinian remaining cities driving officials from their posh offices to their posh villas and mansions. Israeli and Palestinian businessmen/politicians, separately or collaboratively work to ensure they get more millions in their bank accounts while millions of children sleep hungry and cold.

Palestine will have an implanted population hold elections for an even more right wing apartheid government on January 23. In an interview, I tell a reporter that the choice in these “Israeli elections” is between right-wing and extreme right wing and ultra right wing government. Ben Gurion who presided over the destruction of 530 Palestinian villages and towns and the ethnic cleansing of most of Palestine would if resurrected today be considered far too moderate to even get one seat in the Israeli Knesset . Palestine continues to be transformed from a multiethnic, multireligious, multicultural society that was at balance with its environment to an apartheid Jewish state with overpopulated ghettos. The larger ghetto called Israel and the smaller ghettos of Gaza, Bethlehem, Ramallah etc. They are teaming with people who now suffer from pollution and increased rates of cancer but also from deep psychological scars that will not heel easily even if apartheid was ended this year. The combined Palestinian and Israeli environmental damage will soon outstrip any possibility of livability. This is not even considering increasing populations and global warming and pollution etc. Since the 1960s, this country (and it is one country Israel established on the ruins of Palestine) is actually not self sufficient. It is only maintained by massive infusion of money to benefit both the Zionist project and to sustain the humanitarian needs of an increasingly impoverished Palestinian natives. This economy of beggary cannot be sustained long term for many reasons. So a majority of Israelis and a lot of Palestinians consider leaving. All of this is also sustained by a web of lies using religious mythologies and other manufactured stories to justify the unjustifiable. The brainwashing is reaching incredible levels as most young Israelis believe ethnic cleansing was OK in the past to allow for a Jewish state in Palestine and they also believe it is OK now to remove Palestinians because we refuse to accept the colonization and transformation of our country. This negative trend towards more racism was predictable from the early days of Zionism and it explains why in each Israeli election cycle, the government becomes more right wing.

We can blame these ominous negative trends on Israeli and Palestinian “officials” including their known and hidden corruption but we must also take responsibility as people of this country (whether we happen to be natives of colonial immigrants, whether we are Jewish, Muslim, Christian, atheists etc). If human history has a lesson to teach us, it is that only when people stand-up to the lies of governments, shed demented ideologies, and declare rebellion they can (and must) change things for the better.  Even in the United States, a country built on the genocide and ruins of native populations, positive trends happened only when enough people said “enough is enough”: giving women a right to vote, social security, 40 hour work weeks, ending the war on Vietnam , the civil rights movement, reigning in those who pushed for nuclear confrontations, and ending US support of apartheid in South Africa among many. In all these cases, politicians were pushed by massive popular movements. Politicians did not lead but were actually dragged kicking and screaming to eventually do the right thing. Evil continues only when enough people let it continue. That is our main challenge.

We are encouraged by the growth of activism including campaigns of boycotts, divestment, and sanctions.  We are encouraged by the growing chorus rejecting the illusion of a two-state solution in favor of one democratic state in historic Palestine.  We are encouraged by the persistence and resilience of the Palestinian people.  May the new year bring more people out of the darkness of a life of apathy and into the bright, beautiful and meaningful life of caring (empathy), self-empowerment, and action for justice (a prerequisite for peace). For those already active, may you continue to be blessed and may you never lose those qualities that make you a great and caring human being.

Action: A call from Palestine to the EU; Ask your governments and EMPs to suspend EU-Israel Association Agreement and stand up for human rights in 2013! http://palsolidarity.org/timeforjustice/

Action: Sign a letter to President Obama to say: no blank check for Israel http://obamaletter.org/

Confrontations in Nablus between Palestinian "security services" and Palestinians unhappy about the Palestinian authority (whose term in office has long expired) taking decisions without consulting the people
https://www.youtube.com/watch?feature=player_embedded&v=y3SsyUZeAl4


My letter as published in Cape Cod Times, December 26, 2012:
In his Dec. 13 letter, Joseph Garodnick attacked the letter of Noreen Thompsen. But instead of dealing with the substance of her letter about human rights abuses by Israel in its colonization of Palestine, he chose to attack the messenger — one of her sources. That source happens to be me.
Garodnick claims I did not achieve tenure at either Duke or Yale; actually, I was never on a tenure-track position and did not seek tenure at either place. He then twice mentions my fields of genetics and biology as if somehow this diminishes my credibility or ability to write on human rights. I wrote two books on human rights and I did teach the subjects of history and human rights.
In this season of Christmas, I write from Bethlehem, a city now of 180,000 Palestinian Christians and Muslims who lost most of their lands and are squeezed into a ghetto, isolated behind a 30-foot wall, and suffering from over 30 percent unemployment. Talking about those things is a far better use of your pages than printing personal attacks on authors of documentary sources.
Mazin Qumsiyeh
Bethlehem, West Bank
The writer is a professor at Bethlehem and Birzeit universities.