In Bethlehem there were two young people buried Wednesday, both executed by occupation forces in the prime of life and both not discussed in mainstream western media.   We buried a 15 year old child, Saleh Ahmed Alamarin.  The funeral march moved from Al-Azza refugee camp to Aida Refugee camp cemetery.  These are two of the three refugee camps in Bethlehem.  Saleh, like millions of Palestinians, was a refugee whose family was ethnically cleansed to create the “Jewish state” on top of Palestine.  We Palestinians refer to parents by the name of their first born child.   Abu Saleh (father of Saleh) is perhaps in his mid 30s seemed to have endless tears during the many hours of burial and receiving condolences and hugs.  I did not meet Im Saleh but I cannot even begin to comprehend the pain of these two parents who lost their only son.  There was talk over email of a cover-up and delay of reporting the death for political reasons.  But for the nearly 2000 mourners there was only sadness and anger.  Some young people mobilized and started throwing stones at the tall apartheid wall and watchtower that separates Bethlehem from its agricultural lands to the north (and thus also separates us from our city Jerusalem).  Some of these young people will be arrested by the Palestinian authority (a dozen were apparently arrested in Aida refugee camp the day of the funeral). 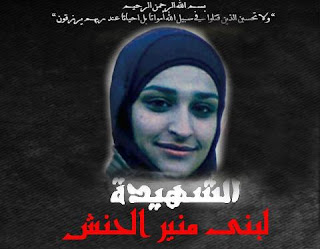 We also buried in Bethlehem Lubna Mounir Hanash (21 year old) who was murdered by an occupation officer who shot at a group of Palestinian civilians on the road near the refugee camp of Al-Aroub.  She was a senior studying political science at Al-Quds University.  Two other civilians were injured in the hail of Zionist bullets.  Lubna’s blood stained the asphalt at the road curb next to early spring grass.  It reminded me of the famous painting by artist Suliman Mansour of the 15 year old martyr Lina AlNabulsi.  The simmering anger will only grow as Israeli society seems oblivious to the suffering of millions of Palestinians and instead focusing on the political maneuvering of cunning rich Israeli politicians with fake smiles and lots of lies. 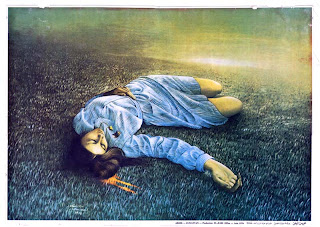 Bride of Nation by Mansour

I have returned from the US to Palestine nearly five years ago.  In this period, I witnessed many Israeli atrocities.  Atrocities cover just about every item of the Universal Declaration of Human rights: Forcible displacement, home demolitions, extra judicial executions, theft of land, theft of natural resources, religious persecution, destruction of infrastructure, use of illegal weapons like White Phosphorous on civilian population, unlawful imprisonment based on political beliefs, economic deprivation and many more.  I also witnessed atrocities from Palestinians towards other Palestinians ranging from corruption, greed, collaboration with the occupiers, suppression of free expression, unlawful imprisonment, theft of public funds, and many more.  But I also witnessed amazing generocity, kindness, heroism, self-sacrifice, intellectual thinking, acts of principled resistance, love, kindness and more.  I am blessed to have hundreds of friends who exemplify what our late friend Vittorio Arrigoni used to describe as “staying human.”  We did lose many of those great individuals (added to the tens of thousands of Palestinian martyrs).  But for each lost hero, ten arise.  Hence our optimism.  And today a group of us demonstrated in front of two Israeli colonies in the Gush Etzion complex of settlements. 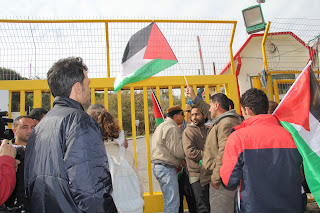 Palestinians at colony of Eliezer

The struggle goes on.

Video from hospital treating injured and where Lubna was pronounced dead
http://www.facebook.com/photo.php?v=419138858161608

We host occasionally some young Jews who come after the so called “Taglit - birthright” Zionist program and who chose to extend their stay to come and see what life is like in the cantons/concentration camps of the West Bank.  The Zionist program boasts that it brought 340,000 young Jews (most from the USA, the other Zionist occupied territory) aiming at “strengthening Jewish identity, Jewish communities, and solidarity with Israel.”  The few who chose to come see us get the real picture not that doctored Zionist hasbara.  Most though do not hear about us or the possibility of coming here.  Here is an example of a blog from one such young Jewish lady who chose to do the right thing and see beyond the scripted hasbara/propaganda program: http://larksongs.wordpress.com/

Five ways of looking at the Israeli Knesset by Neve Gordon
http://www.lrb.co.uk/blog/2013/01/23/neve-gordon/five-ways-of-looking-at-the-knesset/

How Muslims and Christians are getting together, an example from Bethlehem, Pennsylvania!
http://www.youtube.com/watch?v=oARJXqQYL00
http://muslimschristiansunited.blogspot.com/
and here is another interfaith group promoting justice/peace
http://www.tolef.org/