Signs of end of the civilization and signs of its rejuvenation

There are many signs of end of the civilization and signs of its rejuvenation.  These difficult times do test people's souls and minds and while we find those who fail the test (Netanyahu, Trump, Hagee, BinSalman, etc), we do find so many that pass it and light the way for us. 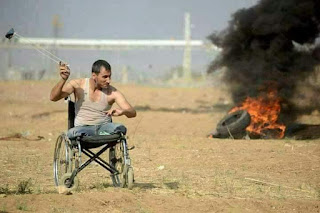 The signs of an end are so many and they are mostly related to the behavior of the rogue regimes of Israel and te USA: the efforts to challenge climate change, collapse of disarmament deals (first with Russia then with Iran), stealing a city from its people to gift it to immigrant European Jews and celebrating that theft (bad as it is it is horrible when it is related to the most sacred of cities: Jerusalem), massacres and ongoing genocide in Gaza that two million are subjected to (mostly refugees), governments that no longer even pretend to care about human rights or international law. In fact, one sees that most governments support apartheid and ethnic cleansing. I could go on. But there are also signs of hope and struggle.

My book "Popular Resistance in Palestine: A history of Hope and Empowerment" goes over a part of our 130+ year history of amazing resiliance and success. Palestinians around me give me hope. People of Gaza (maligned by racist thugs in international media owned by racist thugs) give us hope. Today a strike is total among millions of Palestinians living under Israeli occupation. My students give me hope. They and all young Palestinians are willing to sacrifice even with their lives for the cause (they just need leadership that is sorely lacking). I see hope in the Palestinians demonstrating in Jerusalem and inside areas of Palestine occupied/colonized in 1948. I see it in the angry looks of Israeli colonial soldiers ripping flags out of civilain hands, beating people, frustrated that they are unable to colonize people's minds like they colonized their lands. And while governments in the mentally colonized gulf states (Saudi Arabia and UAE) are silent, people and other governments ACT. South Africa pulled its embassador from "Israel" and so should other countries. People of all faiths act. Naturei Karta (Orthodox Torah Jews) demonstrated in Jerusalem together with their Christian and Muslim Jerusalemites against the imposter false prophets (Kushner, Freedman, Greenblatt, Netanyahu, and Hagee). Boycotts, Divestments, Sanctions will grow. I think people should also boycott and sanction the country that is "the biggest purveyor of violence in the world" (the words of Martin Luther King Jr), that is the USA. We all must ACT now.

More and more people are recognizing Zionist propaganda in the so called mainstream media. For example CNN reports using Zionist speak and interviews mostly Zionist politicians and US politicians who are Zionist. They use terminology that is rather sick: "Dozens die in Gaza as US Embassy opens in Jerusalem" (who died, who killed them we are not told) or people die "in clashes" at the borders of Israel and Gaza (it is not clashes when unarmed civilian refugees are gratuatously massacred as they demonstrate for their Internationally recognized right to return to their homes and lands. The real story of the blood bath over the past 24 hours is that as it "celebrates" having twisted the arm of an American administration to violate International law by relocating its embassy to stolen lands, Israeli apartheid forces massacred 59 unarmed civilians many of them children, one a double amputee and injured over 2000 civilians, over 700 of them with live ammunition.

"The shock from Trump's declaration re the Iran Deal was amplified by his disregard of int'l community, and information provided by international agencies and his relying solely on the word of one man, Benjamin Netanyahu."  https://ahtribune.com/world/north-africa-south-west-asia/syria-crisis/2257-israel-war-in-syria.html


Al Walaja: the Palestinian village being slowly squeezed off the map
https://www.theguardian.com/world/2018/may/13/al-walaja-palestinian-village-being-squeezed-off-the-map

Donald Trump, spokesperson for US President Benjamin Netanyahu. Philip Weiss gets it right "There is a powerful rightwing Israel lobby, and Netanyahu is the leader. These are the same forces that pushed for the Iraq war 16 years ago to such ill effect for the Middle East, and they are sowing destruction once again."  http://mondoweiss.net/2018/05/wrecking-politicized-israel/

Arise, all women who have hearts, whether your baptism be that of water or of tears! Say firmly: “We will not have great questions decided by irrelevant agencies, our husbands shall not come to us, reeking with carnage, for caresses and applause.
“Our sons shall not be taken from us to unlearn all that we have been able to teach them of charity, mercy and patience. We women of one country will be too tender of those of another country to allow our sons to be trained to injure theirs.”
From the bosom of the devastated earth a voice goes up with our own. It says, “Disarm, disarm! The sword is not the balance of justice.” Blood does not wipe out dishonor nor violence indicate possession.
As men have often forsaken the plow and the anvil at the summons of war, let women now leave all that may be left of home for a great and earnest day of counsel. Let them meet first, as women, to bewail and commemorate the dead. Let them then solemnly take counsel with each other as to the means whereby the great human family can live in peace, each learning after his own time, the sacred impress, not of Caesar, but of God.
In the name of womanhood and of humanity, I earnestly ask that a general congress of women without limit of nationality may be appointed and held at some place deemed most convenient and at the earliest period consistent with its objects, to promote the alliance of the different nationalities, the amicable settlement of international questions, the great and general interests of peace.