My political awareness started out in September 1970 when I was 13 years old. That is the first time I saw my late father cry. My parents had tried t isolate us from the miseries of the world but in this case he could not help it as he watched how politics results in innocent people massacred. The quarrel between the PLO and the Jordanian monarchy had peaked into a war. Jordanian troops with tanks entered refugee camps killing perhaps thousands (no one knows the number) of Palestinian refugees as they uprooted the PLO armed factions from Jordan. My father still would not talk much politics so I turned to my mother who gave me a brief history lesson much of it personal. For example she told me about her school friend Hayah Balbisi who was murdered with her students in Deir Yassin. The images on TV of flattened shaggy shantytowns over dead bodies still haunts me. I began to educate myself of things they do not teach us in school about our own history: that British invasion of Palestine September 1918 was a direct result of Zionist lobbies that gave the Balfour and the Jules Cambon declarations 1917 and learned of the British imposition of apartheid through the first Zionist ruler here Herbert Samuels.

In September 1982, it was my turn to cry uncontrollably as I saw images of the massacres at the refugee camps of Sabra and Shatila (Israeli paid proxy militias). By September 2001, I had been living and working at Yale University for 1.5 years and I had been in the US for 22 years. In those 1.5 years in Connecticut, we had held over 20 events for Palestine and I had published dozens of letters and opinion articles on Palestine. We were happy we succeeded in pressuring Yasser Arafat not to sign onto the humiliating agreement offered him at Camp David that abrogated the right of Palestinians to return to their homes and lands (I cofounded a group that managed to collect over 800,000 signatures for refugee rights between 1997 to 1999). We were planning moe actions and more events especially in protest of the ongoing massacres committed by the war criminal Ariel Sharon in the occupied Palestinian territories. That was what some people had called the second Intifada 2000-2005 (my book on Popular resistance actually shows it is number 14 or 15). We planned events, held rallies, organized protest and also cared for the injured. We had already brought a girl who was 8 years old who lost her eye to an Israeli rubber-coated steel bullet and gave her a prosthetic eye (Hiam was one of hundreds of children to lose eyes and limbs in 2000-2003). Another girl Marwa Alsharif was coincidentally with us in September 2001. Marwa Al-Sharif had a bullet in her head which was just removed by neurosurgeon in Hartford and she was recovering (I acted as translater for her and her mother). On 10 September 2001 I was dealing with Zionist back lash and media distortions about the Israeli targeting of these children. On September 4, 2001, the Zionist group CAMERA posted to their members one of our media alerts and added “As you will see, pro-Palestinian activists are very focused and energetic and are using sophisticated and diverse methods to press their case. We can do no less!” An article by Rhonda L Maacarty and me appeared in Q magazine about the growing role of international solidarity in the struggle for freedom in Palestine. The struggle was plodding along but then it came to the USA in a big way on 11 September 2001. My first message after I recovered from the shock of the news was this sent at 11:30 AM on Tuesday 11 September 2001:

Talking points on the catastrophe
Many have already been contacted by the media for commentary on the attacks in NYC and Washington. Here are possible talking points:
1) This is an awful catstrophe
2) Our first thoughts must be with the victims.
3) We condemn acts of terror in the strongest possible ways.
4) It is important not to jump to conclusions about who or how this was caused and to wait for the situation to be clear.
No need to say anything else.
Mazin Qumsiyeh

I checked on my friends in New York (an area only 40 minutes from our home in Orange, CT) and we held vigils for the victims at Yale (hundreds of victims were also Arab and/or Muslim Americans). I was interviewed at least 10 times in the next few hours. That night was sleepless night as we addressed emails and made phone calls etc. Marwa Al-Sharif and her moher were at the Friday prayers called for by all the mosques in the US after this catastrophic event to pray for the victims and pray for peace. 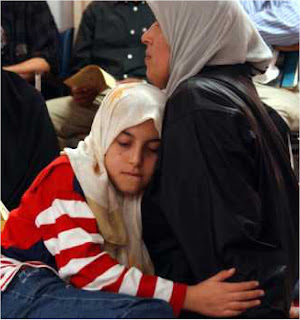 In the next few weeks I gave over 50 talks dealing with this issue. In these talks and in my writings (including a book I published soon after) I warned that unless the west changes its foreign policy in the Arab world (stop supporting dictatorships like “Saudi Arabia” and the apartheid colonial system in Palestine “the Jewish state of Israel”, that we will have many more black Septembers. I warned of a potential refugee flood much worse. We even mobilized a roving bus called the “Wheels of Justice Bus Tour” which talked about Palestine and Iraq and the importance of changing policies. We spoke at in 4 years in 48 states of the USA. We protested, we marched, we did civil disobedience etc. My contract at Yale was not renewed in September 2005 and I left the USA in September 2008 to try and make a bigger difference in Palestine. September 2015, we see more suffering, more refugees, children washing ashore in the Mediterranean. We still cry, we still mourn, but we must still act. It is not enough to tell the callous western leaders “we told you so”. They still make horrible catastrophes. Please act to stop them (e.g. the USA/Saudi collusion to attack Yemen is creating another catastrophe).

Here in Palestine in the past 7 years, I adapted methodologies and changed directions to push for change. I donated much of what I made working at Duke and Yale to Palestine. I was detained, arrested, and harassed but luckily much better off than 95% of other Palestinians with a conscience. Now I spend a majority of my time “lighting candle better than cursing the darkness” and “having joyful participation in the sorrows of this world”. I am blessed to be surrounded by good active people, volunteers of all backgrounds and from many countries. Our email colleagues are in the tens of thousands. A luta continua – the struggle continues. I want to take this opportunity to thank those thousands of you who act for peace and justice. You donate of your time and money but most important you give of yourself. As the great Kahlil Jubran once wrote:

“You give but little when you give of your possessions. It is when you give of yourself that you truly give. For what are your possessions but things you keep and guard for fear you may need them tomorrow? And tomorrow, what shall tomorrow bring to the overprudent dog burying bones in the trackless sand as he follows the pilgrims to the holy city? And what is fear of need but need itself? Is not dread of thirst when your well is full, the thirst that is unquenchable?
There are those who give little of the much which they have--and they give it for recognition and their hidden desire makes their gifts unwholesome. And there are those who have little and give it all. These are the believers in life and the bounty of life, and their coffer is never empty. There are those who give with joy, and that joy is their reward. And there are those who give with pain, and that pain is their baptism. And there are those who give and know not pain in giving, nor do they seek joy, nor give with mindfulness of virtue; They give as in yonder valley the myrtle breathes its fragrance into space. Through the hands of such as these God speaks, and from behind their eyes He smiles upon the earth.
It is well to give when asked, but it is better to give unasked, through understanding; And to the open-handed the search for one who shall receive is joy greater than giving. And is there aught you would withhold? All you have shall someday be given; Therefore give now, that the season of giving may be yours and not your inheritors'.

You often say, "I would give, but only to the deserving." The trees in your orchard say not so, nor the flocks in your pasture. They give that they may live, for to withhold is to perish. Surely he who is worthy to receive his days and his nights, is worthy of all else from you. And he who has deserved to drink from the ocean of life deserves to fill his cup from your little stream. And what desert greater shall there be, than that which lies in the courage and the confidence, nay the charity, of receiving? And who are you that men should rend their bosom and unveil their pride, that you may see their worth naked and their pride unabashed? See first that you yourself deserve to be a giver, and an instrument of giving.
For in truth it is life that gives unto life while you, who deem yourself a giver, are but a witness.
And you receivers... and you are all receivers... assume no weight of gratitude, lest you lay a yoke upon yourself and upon him who gives. Rather rise together with the giver on his gifts as on wings; For to be over mindful of your debt, is to doubt his generosity who has the freehearted earth for mother, and God for father.”