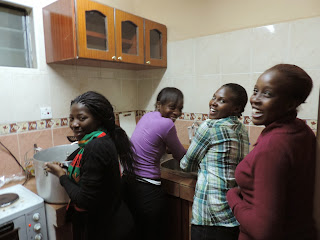 Some participants cooking an Arabic dish

Just returned from a trip to Kenya where I facilitated four days of workshops for a group of young people (18-26) who came from several countries (Tanzania, Kenya, South Sudan, Zambia, Sri Lanka). I like to work with young people and this also provided a chance to summarize many things that may be useful as a transition from one chapter to another. I share with you the outline of what we discussed and did because it represents a distillation of experiences and resources that might be useful to readers whether activists or potential activists

But two more notes first. I visited and was touched by the scene at Westgate Mall in Nairobi following the recent terror attack. This and others social and political injustices are always sad statements on the status of the human species.  We have a long way to continue working to get people away from wars and conflicts to peace, justice, harmony, and to take care of our suffering planet. I also visited colleagues at the National Museums of Kenya and I hope soon we will develop cooperation in biodiversity/environmental research especially on small mammals and some invertebrates (notably scorpions). The last time I was in Kenya was in 1985 so this was a pleasant reminder of the beauty of the country and its people.

People and the Land: Developments of Canaanite agriculture, civilization, alphabets/languages, and religions. Before the wave of European Zionist colonization, Palestinians were of various religions: about 85% Muslim, 10% Christian, 5% Jewish, Bahai and others. Throughout nearly 15000 years of civilization, Palestine was and remained despite occasional failed efforts to change it) multireligious and multicultural society.  See http://qumsiyeh.org/chapter2
Raed, Basem. Hidden Histories: Palestine and The Eastern Mediterranean. Pluto Press. 2010
Whitelam, Keith W. The invention of Ancient Israel: The Silencing of Palestinian History.  New York, Routledge. 1997.

Evolution towards Zionism: Use of religion for political purposes (e.g. Crusades, Zionism). 19th century ethnocentric nationalism, European “anti-semitism” (misnamed as it is actually anti-Jewish),
Said, Edward The Question of Palestine. New York: Vintage, 1992.
Ellis, Marc. Israel and Palestine out of the Ashes: the search for Jewish identity in the twenty-first century. Pluto, London, 2002. See also my review pf this book at http://qumsiyeh.org/outoftheashesbymarcellis/

Ehnic Cleansing/Refugees
How 530 villages and towns were depopulated.  Complicity in this crime against humanity etc.
See http://qumsiyeh.org/chapter4/
Documentary film and discussion of “Jaffa: The Orange’s clockwork”
Documentary film and discussion of “The Land Speaks Arabic”
Other resources:
Masalha, Nur. Expulsion of the Palestinians: The Concept of "Transfer" in Zionist Political Thought, 1882-1948. Washington, DC: Institute for Palestine Studies, 1992.
Pappé, Ilan. The Ethnic Cleansing of Palestine. Oxford, UK: Oneworld, 2006.
Occupation and Colonial settlements: Documentary Film and discussion of” Occupation 101” (covered in workshop in Jordan)

Case Study of Gaza Strip: Documentary Film screening and discussion of “Gaza Strip”
Case Study of Jerusalem: Judaizing the city and destroying its character that existed for hundreds of years. http://qumsiyeh.org/chapter5/

Israeli Apartheid  (inside and outside the Green Line) as worse than South African apartheid (Film not shown but worth showing is Roadmap to Apartheid). Israel as a colonial racist state.  See http://qumsiyeh.org/chapter7/
Jiryis, Sabri. The Arabs in Israel. New York: Monthly Review Press, 1976. Translated from the Arabic by Inea Bushnaq.

Palestinian Political Structures and Popular Discourse
Evolution of Palestinian political discourse from the late 19th century till today.  Importance of the many key uprisings (1881, 1904, 1921, 1929, 1936, 1948, 1956, 1971, 1974, 1981, 1987, 2000) to the changes in political configurations in Palestine.   Palestinian constants (thawabet).   Nature of the resistance in relation to corruption, political representation and exclusion etc. The negative impact of the Oslo “surrender” accords.

Palestinian culture/art/music/food
-We listened to some music and watched dabka
-We cooked a bit of Palestinian food
- We read some poetry
-We saw a short theater play (from Al-Rowwad in Aida Refugee camp) see http://www.youtube.com/watch?v=XkMXoukhHzk
- We discussed the role of poetry, theater and other art forms in the struggle

International context/law: UN resolutions (both security council and UNGA), 4th Geneva convention, Intl Convention against the crimes of apartheid and racial discrimination, Israel use of chemical and other banned weapons. See also http://qumsiyeh.org/chapter12/

Information gathering tools and resources:  Need to acknowledge our biases. More information can always shed light on the subject. Critical thinking and data analysis tools to sort through the myriad available information (including junk and propaganda)

Ways to act for peace with justice globally: We went through this list http://qumsiyeh.org/whatyoucando/ of 65 ways we can each do something for peace and justice (this is applicable not just for Palestine but elsewhere).
-Tool kits http://www.globalexchange.org/country/palestine/resources/kits
-Power of images, maps, photos, see for example http://qumsiyeh.org/palestine101/
-Stohlman, Nancy and Aladin, Laurieann (ed.)  Live from Palestine: International and Palestinian Direct Action Against the Israeli Occupation.    Cambridge, MA: South End Press, 2003.

Media Activism and activism in the age of the internet: see for discussion purposes reading material here (http://qumsiyeh.org/activistmanual/ chapters 6 and 7) and also http://www.ifamericansknew.org/

Boycotts, Divestments and Sanctions BDS (covered in workshop in Jordan). But see also http://qumsiyeh.org/boycottisrael/ We discussed also how we can mobilize for global activism on 9 July 2014 (the 10 year anniversary of the International Court of Justice ruling on the illegality of the apartheid wall and colonial settlements built on Palestinian land). See http://www.icj-cij.org/docket/index.php?pr=71&code=mwp&p1=3&p2=4&p3=6
Other Resources
http://www.bdsmovement.net/call

Christian Role and a direct action:
-Palestinian Christians and their communities (see e.g. http://qumsiyeh.org/christianlinks/).
-Kairos document and its importance, see http://www.kairospalestine.ps/. We also had two volunteers translate the text into Swahili and make copies.
- A group of the young people then went to local churches near our meeting to talk to them about Christian role in bring peace with Justice.  Using the document and discussions is effective.  This was a practical action to show it can be done.  More will be done.
-Answering the oxymoronic “Christian Zionism”. See for resources Kairos and also
Halsell, Grace, Forcing God's Hand: Why Millions Pray for a Quick Rapture ... and Destruction of Planet Earth. Amana, 2002.
Wagner, Donald. Anxious for Armageddon: A Call to Partnership for Middle Eastern and Western Christians. Herald Press. 1999.

Lessons from other struggles sand importance of networking and global action
Documentary film viewing of “A force more powerful” and discussion of power of popular resistance. We reviewed lessons via comparative analysis from India, US civil rights, Palestine, and South Africa.

Looking to the future
Human Rights as a pivotal way to move forward (e.g. use the Univesral Declaration of Human Rights, http://www.un.org/en/documents/udhr/
The One Democratic State Movement
http://qumsiyeh.org/recommenedbooks/
Moral imperative of working for peace with justice in Palestine (the Holy Land)

"There are only two mistakes one can make along the road to truth: 1) not going all the way; and 2) not starting."
"Non-violence is the constant awareness of the dignity and humanity of oneself and others; it seeks truth and justice; it renounces violence both in method and in attitude; it is a courageous acceptance of active love and goodwill as the instrument with which to overcome evil and transform both oneself and others. It is the willingness to undergo suffering rather than inflict it. It excludes retaliation and flight." Wally Nelson, conscientious objector, civil rights activist, and tax resister
Posted by Qumsiyeh at 10/20/2013